A Retrial for Papon?

The French high court has refused the country’s most famous Nazi collaborator a retrial, but should 93-year-old Maurice Papon have the chance to get his war criminal conviction overturned? DW readers responded. 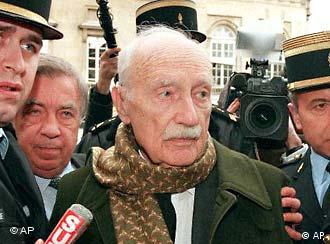 Maurice Papon is still seeking to clear his name

I do not see how France can not allow the appeal. The reason why this procedure is in the Court of Cassation is precisely because the European Court of Human Rights condemned France for having deprived Papon of his fundamental right to appeal his conviction. It seems to me that the Court of Cassation will have to hear his appeal, but, since that appeal would succeed only if Papon can establish legal flaws in his criminal trial, it seems unlikely that the Court would quash his conviction. Bottom line: He would have been accorded the right to appeal his criminal conviction, in accordance with the verdict of the European Court of Human Rights, but, since he was given a full and fair trial, the lower court's conviction will probably stand. -- Vivian Curran (Professor of Law)

The Papon case should not be reopened to exonerate him. Instead, he should be sent back to prison, as he is a war criminal. The fact that he is old, and in ill health is no reason to not have him in prison. He should be held responsible for his crimes. -- Kristine Stuef, Canada

Papon belongs in prison. I subscribe to the feelings of the Wiesenthal Center. "Misplaced sympathy" is the correct diagnosis. What kind of human being is he? -- Michael Schwartz

France's highest court rejected the request for a retrial by the country’s most famous Nazi collaborator on Friday: Ninety-three year old Maurice Papon will not get a chance to fight his conviction for war crimes. (June 12, 2004)