With her video report on the oppression of India’s Dalit women, DW journalist Akanksha Saxena won the Laadli Media Award 2022 for gender sensitivity in journalism in the category Hindi: Web issue-based program. 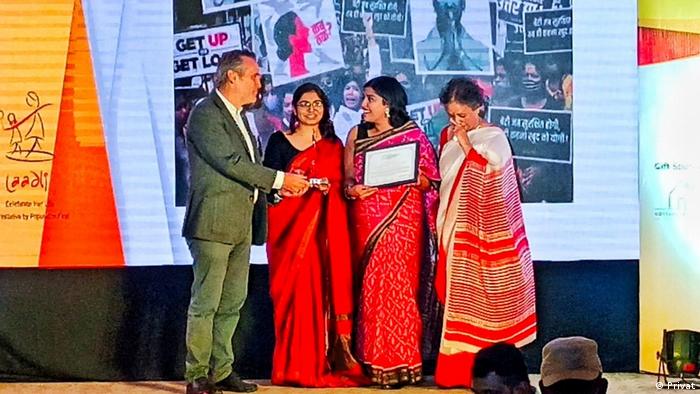 DW: Your report  "Is India’s justice system failing low caste Dalit women" has been awarded the 12th Laadli Media Award, which is supported by UNFPA and the Norwegian Embassy in New Delhi. With your journalistic work, you are making the discrimination and oppression of marginalized groups like the Dalit women in the media more visible to the public. What does this award mean to you?

Akanksha Saxena: It is a great recognition and I feel deeply honored. However, it is a long road ahead for big changes. As a journalist, I want to make my contribution to raising awareness through media coverage of the situation of marginalized and disadvantaged groups, in this case, Dalit women who are considered one of the most oppressed groups in India. The issues of under-representation and marginalization arise from discrimination and systemic inequity. Earlier this year, I presented a business case to build a diverse and inclusive newsroom at WAN-IFRA's Indian Media Leaders eSUMMIT 2022. The numbers present a stark reality. For instance, in mainstream Indian media, both print and electronic, the editors from marginalized groups don't even form 10 percent of news organizations despite being more than half of the Indian population. That is really worrying for a country like India which is set to become the most populous nation in the world. This underrepresentation distorts reality. Dalit women face unspeakable atrocities and covering these issues in a sustained way is both important and needed.

DW: Your award-winning video report features the appalling injustice done to Dalit women – an issue that is hardly covered by Indian media. Have you personally received criticism for giving these women a voice? If so, in what way?

Akanksha Saxena: I have been told that this story was not picked up by mainstream media networks. I am not certain, but one of the reasons could be the makeup of the editorial teams there. The privileged upper caste groups fail to see crimes against Dalit women through the lens of discrimination. Perhaps some media organizations are apathetic to this issue. It really is about your vantage point and who gets to tell the story. Dalit media outlets are increasing in the country, but challenges remain. It is illustrated well in the 'Writing with Fire' documentary which was nominated for the Oscars and won the best documentary at Sundance Film Festival. On social media as well, some people are blind to discrimination, perhaps due to their own privileges. I regularly face criticism from upper castes from India on covering issues related to Dalits, women and religious or ethnic minorities. Some of this comes from vile trolls, but I have learned to ignore them. My stories open discussions and encourage engagement, and that is satisfying.

DW: Imagine you were the President of India and you were allowed to immediately implement three measures for an inclusive and diverse society. What would they be and why?

Akanksha Saxena: First of all, I think it is important to assess the scale of the problem. There should be demographic surveys in companies and auditable measures to improve diversity as part of the corporate goals of all entities. In most places, lack of diversity is still not considered an issue.

Secondly, it should not be just a talk shop. We should create a culture that recognizes, supports, rewards and advances diversity. Avoid D&I talk alone, instead, prove it in policies. Diversity and inclusion need to happen at all hierarchies and levels in organizations across sectors. It has to reflect in bridging the pay gap, in promotions, in mentoring and in executive roles.

Lastly, affirmative action in education and employment needs to be taken. To bring down systemic inequity is essential. It involves sets of policies and practices within a government or organizations, seeking to include groups that are underrepresented. It could also be through the reservation in ranks and positions, and through providing scholarships and fellowships.

This interview was conducted by Fereschta Shir.