Who we are / Figures

@dw_arabia on TikTok: Creating videos outside the box

TikTok account @dw_arabia is the newest social media account at DW. How did it manage to become a roaring success with users? We spoke to creator Adonis Alkhaled about what it takes to succeed on TikTok. 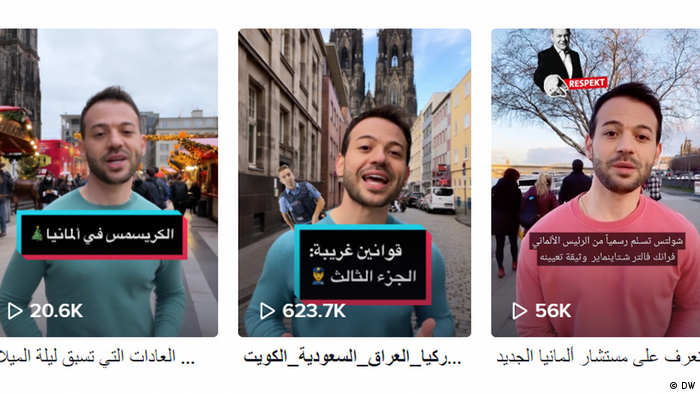 Formerly known as the lip-syncing app Musical.ly, TikTok has developed into a platform that cannot be overlooked anymore. Not only as an entertainment app, but also as a tool for young people to keep up with politics and take part in current debates.

One of the latest adopters of the trend is DW's Arabic service. It launched the TikTok account @dw_arabia in August. The team made it their business to bring German culture closer to their Arab audience and make it more relatable. A venture crowned with success: the account so far has gained over 236,300 followers and more than 534,000 likes.

DW editor and presenter Adonis Alkhaled came up with the idea for the account. Alkhaled said he realized "the huge need for young Arabs whether living in Germany or in the Middle East to have more balanced content" on the video-sharing app, adding that he was impressed by "the positive vibe in the comment section."

The account @dw_arabia focuses on German-related topics, such as lifestyle and culture. The target group is 14 to 25 years old. Alkhaled: "The application allows an easy way for users to discuss news and hard-hitting topics in a more open way than Facebook or Instagram. Simply because the app helps finding like-minded people from all around the world because it curates content to your interaction and engagements."

@dw_arabia exceeded 130,000 followers in its first days and now has 236,300 followers. In September 2021, the first month since its launch, @dw_arabia reached a staggering 9.6 million views. "This is the highest growth a DW platform has ever witnessed in a few days and across all DW languages," says Alkhaled. DW Head of Arabic Online Doaa Soliman supported his team from the start and gave them "the confidence to be bold and create outside-the-box content."

In the first month alone, the TikTok videos on @dw_arabia were viewed 9.6 million times.

Boldness and creativity luckily happen to be characteristics of Alkhaled. The secret to the account's success lies in being one's authentic self, he says – plus understanding the algorithm of TikTok. "I took part in different trends and simply enjoyed the platform by playing by its rules. From my experience it's important to find a balance between being informative and keeping up with new trends," he says.

In another collaboration with colleague Emily Gordine, Alkhaled managed a similar balancing act with the format "Merkel's chair". People on the street were asked what they would change if they were chancellor. The format, launched ahead of the German federal elections in late September, was particularly successful on Instagram (Reels) and TikTok with an average of 54,000 views per video. On the Instagram channels DW Persian and DW Arabic, the average number of video views was 219,000 and 91,000 respectively.

"We started from Germany, which was our 'home turf' so to speak. However, in 2022 we will be producing on location in target countries such as Egypt, Lebanon and Iraq, if the political situation on the ground allows it. We're also thinking of including other countries where our videos were very well received, such as Tunisia, Jordan, Saudi Arabia and the Emirates," Alkhaled says.

Even though TikTok videos are sometimes only a few seconds long, it can take up to nine hours to produce a video. Interacting with followers and cross-posting are also part of the job. "Multitasking is essential for TikTok journalists. We choose the topics ourselves. We film and edit. Then I publish the video and take care of managing the account," Alkhaled explains. "Tiktok needs personalized stories. This means you might need to reveal personal information about yourself."

As the faces of @dw_arabia on TikTok, Alkhaled and his team do just that – and the growing number of followers proves them right.

TikTok Video: How to work in Germany (6.7 million views)