At the closing ceremony of the Egypt Media Forum (EMF) on Monday night, DW presenter and reporter Jaafar Abdul Karim received a special award as an acknowledgement of his successful Arab-Language show JaafarTalk. 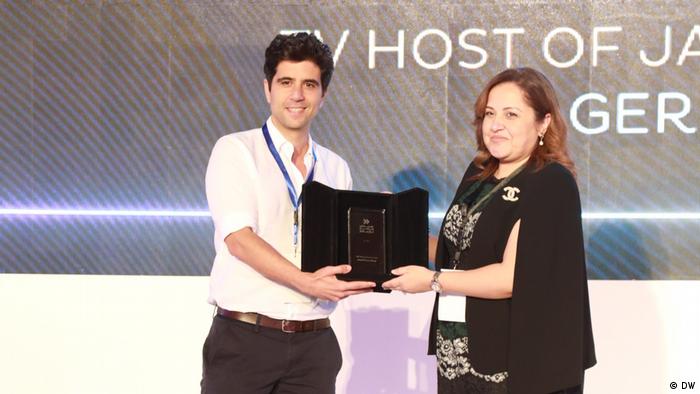 This year's EMF, taking place in Cairo on November 27/28, saw Jaafar Abdul Karim, whose show JaafarTalk has been running since August 2019, participate as guest speaker as well as award winner.

Jaafar Abdul Karim said: "As I'm standing right here in Egypt, accepting an award for my work as a journalist, I hope there comes a day when not a single journalist is in prison. There are many journalists in prison, under threat and intimidation and we are mourning for those who were killed because of their work for societies across the Middle East and the World. I dedicate this award to all my colleagues who are being harassed, threatened and jailed – for simply doing the job they love."

On his long-running show the journalist said: "Just like myself and my team, I feel like JaafarTalk has kind of grown up over the years and evolved into an important free platform for people to discuss their diverse perspectives and inspire each other."

JaafarTalk relies on interaction between the guests, who come from different countries in the MENA region and represent diverse views of a social issue. Both the studio audience and users get a chance to express their opinion via social media.

EMF President Noha El-Nahass said at the award ceremony: "Jaafar Abdul Karim has inspired a whole generation and contributed to the image of a journalist in the Arab World with his believe in freedom of speech and diversity. Close to his audience, whether on the ground or via social media, he creates a free space for a generation longing for self-determination."

The international EMF aims to advance the development of media culture and policies in the MENA region. The organizers, who run a strategic communications agency, describe the conference as a "hub for Egyptian media and its international counterparts, with a focus on diversity and new content trends" in order to "build expertise in the local media industry and facilitate professional exchange with international newsrooms, think tanks and development centers."