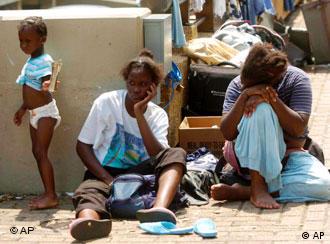 The following comments reflect the views of our readers. Not all reader comments have been published. DW-WORLD reserves the right to edit for length and appropriateness of content.

To blame the Katrina disaster on global warming is just too simplistic of an explanation. Strong hurricanes have been occurring for centuries, but now we have more development and infrastructure along the southeast US coastal areas than ever before. I think for every climate expert who wants to blame intense hurricanes on global warming, one will find another climate expert that will say that this claim can't be proven as the cause. -- Boyd Lawrence, US

We in America are reading how German media is lying about the "cause" of Katrina. We are disgusted! How do you think Americans feel about the morality of the German media (including DW) and national political parties that gloat and pat themselves on the back over the misfortune of others? What kind of nation are you? I, for one, will never support any attempt to prevent global warming just because you have made the selfish attempt to gain political points off of what is a genuine tragedy. Germany is to be pitied, because once again it has lost its moral focus. Germany is no ally of the USA! -- Steven L. Chapman, US

In response to your question as to whether attacks on US environmental policy are justified, the answer is yes. The New Orleans levees were built to stand up to only a Category III hurricane because building them to withstand a Categories IV and V supposedly would have cost too much. Now New Orleans is destroyed and America is sinking under a president who is offering little more than a simpleton's grin and a "good luck--it'll all turn out fine" to the million refugees in Louisiana, Mississippi and Alabama. President Bush is incapable of understanding the magnitude of the catastrophe and the depth of the suffering. There was no plan in place to respond to such a disaster -- and such planning is one of the primary responsibilities of any government. I have been saying for years that the United States is turning into a Third World country where the upper 5 percent of the population controls the government and therefore the lion's share of the wealth. I can well understand Germany's wanting to stand back and say "we told you so," but, please, send these people long-term help. Unless you and other wealthy countries send help, these people will never recover. -- Janet Zimmer, US

You have hijacked one of the worst human crises in American history as just another vehicle for anti-Bush ranting and America bashing. Regardless of its dubious accuracy, the notion that US environmental policy is somehow to blame for the catastrophe in New Orleans is irrelevant at this stage and offensive to the core. -- Russel, US

Shame on you Germans. I am American born of German parents and your lack of concern and compassion in these trying times and lack of support and financial aid without being asked is despicable. I am appalled at your lack of response. Not proud of my ancestry! -- Susan Kempf, US

We are very touched by the messages of sympathy and offers of help that are being sent from so many countries around the world in the wake of this terrible disaster. It is refreshing to see that a helping hand is extended to the US in our hour of need. Our family is grateful for the positive reaction from so many countries. -- Heidi Stopper, US

We are aware that we do not have the best environmental policy in the world, however we also don't have record unemployment. How many of you on the other side of the pond can say the same? We are in the process of achieving a balance between a protected environment and also a competitive and efficient economy and it is not something that happens overnight. In regards to criticisms about our country, we will remember this hostility. When the world comes calling for our money, we'll rightfully turn the cold shoulder. Americans, however, would never do that, as we are not as bitter as some other people in the world. -- Joseph, US

The German non-stop vitriolic criticism of US policies isn't about the Iraq war or environmental issues. It's a pitiful attempt to reclaim the moral credibility Germany forfeited 60 years ago. By the way, it's not working. -- Carla Cook, US

Where are all the offers of help to the US, to aid the victims, to offer supplies, etc? I have not heard of any. The US is always ready to help others, but where is the help when we need it? Yes, we are a rich country, and the aid is probably not needed. Still, perhaps the world hates us that much. If so, (when) the next major catastrophe happens elsewhere in the world, the US should just ignore it and perhaps just watch it on TV. -- Werner Bauder, Charleston, South Carolina, USA

Basically, the emergency response is really sorry, to say the least. On CNN they just pat each other on the back about the great job everybody is doing but actually, they're plucking up survivors two or three at a time with those little CG helicopters, while the military's big helicopters are being shot down in Iraq. And whine, whine, whine about the damage, as if it weren't the US's own fault that our coastal areas become more vulnerable by the year. Heck, with the money we're spending on Bush's wars, we could have moved all of New Orleans further inland, considering that it has started to sink below sea level several decades ago already. Besides, the folks on the Gulf coast are still better off than what our military is doling out to the Iraqi people with such glee, although these callous women on CNN keep comparing this disaster with Hiroshima. The biggest whining they do is about the looters in New Orleans, like that's even important since the insurance companies have to replace everything anyway. Those police officers running off looters would spend their time better trying to evacuate the by now 30,000 people in the local football stadium that's surrounded by several feet of water already with the water level getting higher and higher. That shows you their priorities, doesn't it? The whole thing is nothing but a disorganized mess while our troops are busy dropping another 500 bombs on Iraq. -- Bryan M., USA

Global warming is a problem. I am totally ashamed of other countries that have not offered any help to Katrina hurricane victims in the US. Thank God we do not need you. Shame on all of you. -- Luis, USA

A recent opinion piece by Jens Thurau "Katrina Holds Familiar Lessons" is wrought with misinformation and political bias. Jens should refer to historical facts as the deadlier hurricanes occurred during the early part of the 20th century. -- Don Bartley

There are many alternatives to bio-fossils, particularly solar energy, wind energy, water resources etc., which all are renewable. If used properly, they can fill the gap. Each of these are eco-friendly. -- Syed Ajaz, Kashmir, India

Hurricane Katrina, currently pummelling the US, is sending shock waves over to Europe too. On Monday, the storm caused oil prices to surge to record highs. Stock exchanges stumbled and insurers buckled as anxiety grew. (Aug. 29, 2005)

Even as the damage caused by hurricane Katrina in the US is assessed, the reason for its brutality is already known -- global warming. It underlines yet again there is no alternative to global climate protection. (Aug. 30, 2005)