Quinn McKew: "Freedom of expression is the canary in a coal mine"

The Executive Director of human rights organization Article 19 argues how media freedom is essential for holding those in powerful positions to account — and shares what in the future she still feels hopeful about. 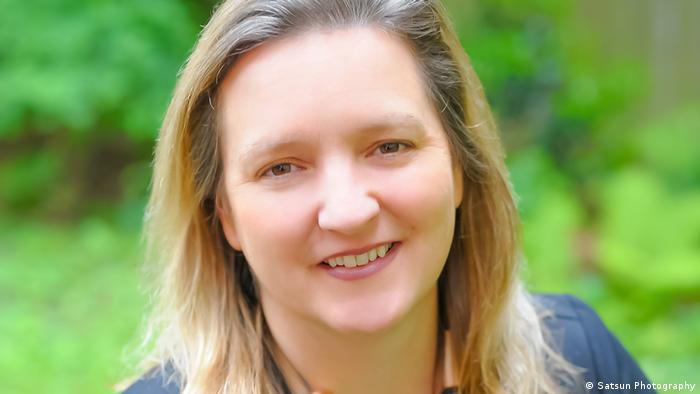 DW: Why does Article 19 distinguish between the freedom of expression and the 'freedom to know'— and what makes the latter equally important?

Quinn McKew: Article 19 of the Universal Declaration of Human Rights, from which our organization takes its name, states that 'Everyone has the right to freedom of opinion and expression; this right includes freedom to hold opinions without interference and to seek, receive and impart information and ideas through any media and regardless of frontiers.'

Freedom to know, or the 'right to know,' is an inseparable component of freedom of expression. It's a right that enables us to question our governments and hold them accountable. It's also a foundational right that is essential for the enjoyment and protection of all human rights.

The right to know helps us develop a fuller understanding of the world, either through asking questions ourselves or by being able to receive information from the media or other means.

This year's Global Expression Report documents a steep decline in freedom of speech around the globe. What kinds of threats does this entail for media freedom in 2022?

Our current report shows that only 15% of the population worldwide live in environments where they can express themselves freely. At the same time, global data indicates that the levels of democracy experienced by an average person are back to where they were in 1989.

This matters as we know that declines in free expression precede other democratic declines. Freedom of expression is a canary in the coal mine: the first right that autocrats attack as they move to undermine democracy. Attacks on journalists and undermining of the independent media are useful tools for regimes which know that, in order to consolidate power, they need to control the narrative.

We're seeing this trend across the world — from Russia to Mexico, from Myanmar to Brazil. Media freedom is under threat also in the European Union — only recently, we commemorated the fifth anniversary of the murder of Daphne Caruana Galizia in Malta.

Without a free, independent and pluralistic media which can hold power to account, democracy cannot function properly.

What idea or technology will most impact future media freedom?

There are a lot of countervailing pressures coming into play in the social media and media freedom space. I'm am personally not a big fan of TikTok as their feed algorithm is changing the way an entire generation is engaging with news and content. You don't tell TikTok what you like, they tell you; and yet it has become one of the fastest growing news sources in some countries.

You can see how this could rapidly become problematic, as TikTok does not, as a rule, try to push back on authoritarian government requests to restrict content. For instance, Russian users can only experience a parallel universe cut off from the rest of the world on TikTok.

What piece of journalistic research or media outlet makes you feel hopeful despite these trends?

It’s been pretty bleak lately in the world, but the collective effort of the journalists in Ukraine gives all of us hope. Their personal courage is astonishing. Even more so when you consider the psychological toll it takes to report such indelible stories of both hope and atrocity while you and your loved ones face the constant threat of death. Ukrainian journalists remind us that we need truth, and need to bear witness if we are ever going to change the world for the better.

Quinn McKew is the Executive Director of Article 19, a UK based human rights organization which aims to advance and defend freedom of expression and freedom to speak in five interacting areas: civic space, digital, media, protection, and transparency. Article 19 cooperates with the UN and other organizations.

This interview was conducted by Antonia Sanke.

Following two years of digital events, the DW Global Media Forum was finally held again in person on June 20 and 21. Delegates from all over the world had a chance to partake in Germany's international media conference.