Britain's Prince Harry has caused public outrage by attending a custome party dressed in a Nazi uniform. A majority of DW-WORLD readers said he should publicly apologize for his behavior. 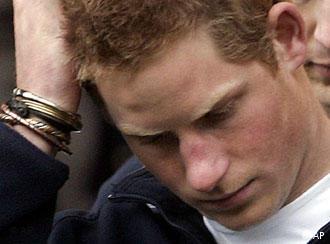 He's had more than one gaffe lately

A public apology from Prince Harry should include the following: His utter humility in making the declaration; a candid display of understanding that his entire life is the exception of privacy legislation and that therefore he has no defense in the context of a private party; a recognition that he has offended many good people and that a knowledge of history is not a disposable commodity but an essential element of democratic monarchies such as Britain. He should show the world that he understands why associating himself with the National Socialist Party is repugnant, why wearing its regalia is not without meaning beyond the confines of his socializing. That said -- it is worthwhile to note that so little has been explained why another member of the family would also be going to a "Native and Colonials" fancy dress party -- which sounds somewhat racist to me. But then, I'm a Canadian, and not so sophisticated. -- David Woodward, Canada

He should not merely visit Auschwitz, he should undergo a few weeks of living like the prisoners at Auschwitz. Perhaps his life of privilege and excused childish behavior could be turned around by enduring some hardship. Harry's apology is not enough; he should face serious consequences for such hateful and insensitive behavior. -- D. Friberg, US

It would be interesting to know some of the other costumes worn to this "native and colonial" party. The British should not be too proud of how they treated the natives during colonial times. Yet, I did not hear any Africans or Indians complaining about this party theme or how they, doubtlessly, were ridiculed at this party. It's just possible, isn't it, that Harry was trying to tell his countrymen something! -- Heike 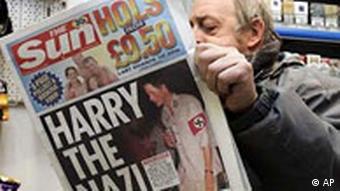 It is a disgrace for the royal member to display such insensivity toward the past suffering of others. Regardless of his royal status, he should be punished according to the law of the land. If he is spared from such "stupid" display, it is simply another excurse to protect him. Agree or not, he is still a human being, flesh and blood, and is not any better than other human being. He should make apology in person if he is man enough. I challenge him to do so. If he dares to do it, he should be brave enough to accept the consequence. The excuse of "poor" choice is quite lame. To be a man, you have to prove it, Harry. -- Chhan D. Touch, US

Harry should apologize in person. I live in the US, was born in the Netherlands, and lived under the dreadful Nazi regime from 1940-1945. No one who has any idea of the horrors inflicted by Hitler and his supporters would do what Harry did. Stupid, ignorant and arrogant -- that's what it is! -- Walter G. Bruinsma, US

Not only should Harry apologize to both the British people and German people via television and radio immediately, he should be sent to Germany by his father, Prince Charles, for a one-year German immersion course. He should also be advised by the authorities at Sandhurst that his application to attend is no longer acceptable or wanted. He is an absolute disgrace and embarrassment to both the Queen, his grandmother, and to his father. -- John A. Brown, Canada

Please click on the second page to read more comments.

Brits out of (Goose) Step with Modern German Image

Thousands of shocked Britons return from Germany amazed at not seeing a single example of "goose-stepping". Media portrayals of Germans have misled generations of British, something Joschka Fischer is concerned about. (Oct. 20, 2004)

Ahead of the Queen’s visit to Germany, Foreign Minister Fischer accused the British of clinging to antiquated stereotypes of Germans. Exchange programs and innovative campaigns are supposed to tackle the problem. (Nov. 1, 2004)

Britain's Prince Harry has made many gaffes in his public life -- smoking cannabis, underage drinking, scuffling with photographers. But his latest caper -- dressing as a Nazi at a costume party, tops them all. (Jan. 13, 2005)