The Creation of No-Go Areas in Germany

DW-WORLD.DE readers this week commented on calls for some parts of Germany to be labeled "no-go areas" in a bid to prevent racist attacks on foreigners during the World Cup. 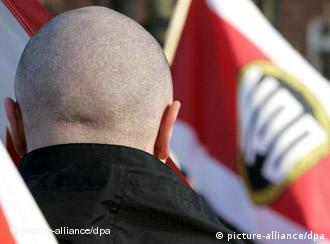 How about "no-go" zones for Neo-Nazis -- namely, the rest of the country -- where citizens are encouraged to speak up and tell these degenerates they aren't welcome among civilized people?-- T. Hughes, Toronto, Canada

Racists who commit violent acts against people because of their race or color should always be given stiff sentences. -- Belinda Lang, USA

Labeling places as no-go areas? For the safety of foreigners ... Absolutely! As long as politicians and the police are slacking and don't crack down on the growing aggression, it will be better to have areas labeled as "dangerous" rather then finally facing a few dead visitors and creating international conflicts that are way more damaging for Germany's reputation. When will the government and/or police wake up, change the laws, and finally use this power to keep Germany the democratic country everybody worked so hard for after WWII? Do we really want to wait until we have a few dead people on our hands and a bad reputation of racism (again)? That would be a very rude awakening for Germany. Prevention was and is always better than damage control. -- Hans Märker, Germany 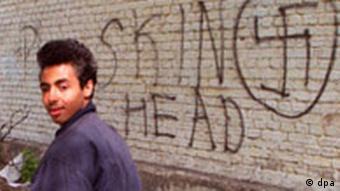 I was fortunate to live in Berlin from 1999 - 2002 while teaching at the John F. Kennedy School. My family and I immensely enjoyed Berlin and found it to be a very "livable" city. There was one problem, however. Two of my three children are adopted and bi-racial (African-American -Caucasian). We never had a problem in the eastern sections of the city (we went there a lot) or in the places in the former DDR that we liked to visit - Dresden (for example). However, we did purposely avoid traveling to areas of the former DDR that we would have liked to have seen such as the beautiful Baltic Sea coast for fear that our kids might be subjected to racial slurs or worse. To be fair, though, the reason we adopted these two kids was they would not have had an easy time as bi-racial kids in their native Texas, either. We live in Vermont, which although statistically the "whitest" state in the USA, has a tradition of tolerance in matters of race and many other things. -- Anon, USA

I feel that Berlin needs a larger and more aggressive police force, especially with all of the current events. It is no secret that the police in Germany do not hold very much power. Do Neo Nazis hate white Americans too? I'm moving to Berlin and the last thing I want to worry about is being attacked simply because I am an "Ausländer in Deutschland." -- Tim, San Francisco, USA

Should there be no-go zones for foreigners? Yes. Some shop owners will be hurt in their purses, but it will hurt a lot more if someone who came to watch the World Cup gets killed for whatever reason. The chances of hosting another championship in the future will decrease drastically. Every country, every city has places where you don't go. It is a tough thing when the world is focused on Germany to admit this, as it would be for any country. -- Anon, Canada

You're damned if you do and damned if you don't. Germans have a history, which try as hard as you might, you will never erase. It is the same here, in the United States, everyone wants to find fault -- history is past. My condolences - you are fighting a lost cause. -- Anon, USA

World Cup visitors who aren't white should steer clear of the state of Brandenburg, a former government spokesman cautioned on Wednesday. His warning caused a storm of outrage -- as well as agreement -- from politicians. (May 18, 2006)