Can DW reach the video-streaming platform's young audience with world news content? That's what the project team wants to find out during a three-month pilot phase. 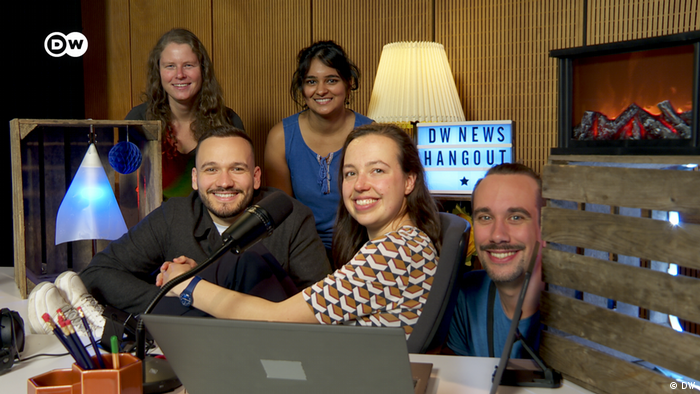 "And we're live!": If you tune into Twitch on Tuesdays or Thursdays at 6 pm CET, this is likely how you’ll hear the host Madelaine Pitt start the show – or stream, as it’s called on the popular platform. Twitch is primarily known for livestreams from video games and chess, but has increasingly broadened its scope to include other non-gaming content and formats. The recently launched Twitch channel DW News Hangout focuses on a combination of information and entertainment.

The two-hour streams highlight the most interesting and important news topics of the week in a mix of interviews, video quotes from across the DW portfolio, and interactive elements like quizzes and community challenges.

The streams put a spotlight on the live chat function: viewers can react and ask questions to the hosts and interviewees in the chat, participate in a variety of interactive games, or suggest the topics that interest them most.

The live format also makes it possible to react to shifts in the community's needs, as seen when the news of the Queen’s passing broke during a stream on the situation in Ukraine. The hosts, community, and an incidentally British expert currently being interviewed about nuclear safety reacted in a unique live moment.

In addition, Twitch offers the opportunity to dive deep into news topics together with the community. This enables the team to build trust with the audience, meet them where actually are and introduce them to DW News on an eye-to-eye level.

A focus on the US-based youth audience

The show is centered around British host Madelaine Pitt with varying co-hosts. It is aimed at young US-based audiences between the ages of 18 and 29. The format was developed by an interdisciplinary DW team with members from DW News, Content Realization, Sales and Distribution, Audience Development and the DW Lab.

The two-hour show currently streams Tuesdays and Thursdays from 6 – 8 pm CET on the DW News Hangout Twitch channel. You can tune in using the link or create an account to actively participate in the chat.