What does digitalization mean for diplomacy? 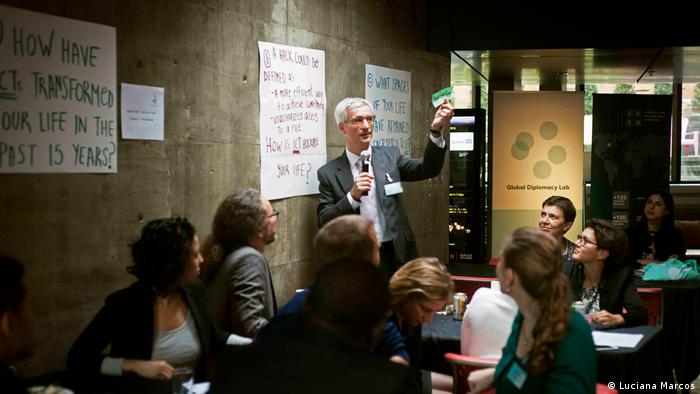 "Which parts of your personal lives are unaffected by digitalization?" This was the question put to the participants of the GDL workshop in Montreal, Canada.

The unanimous response was "none." Everyone agreed that they rely heavily on digital platforms: For their work, for news consumption, for communication with their friends via social media. 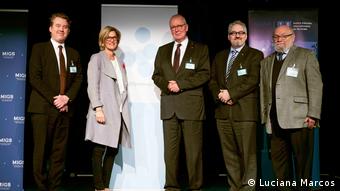 Ruprecht Polenz (center) was chairman of the German parliament's foreign affairs committee before he retired.

The Global Diplomacy Lab included a diverse range of participants: Among them were representatives of the German and Canadian foreign ministries as well as activists and representatives of nongovernmental organizations. The GDL is supported by the Federal Foreign Office, the BMW Foundation Herbert Quandt, the Global Leadership Academy of GIZ, the Robert Bosch Stiftung and the Stiftung Mercator.

They all have one thing in common: They are faced with the challenges of digital diplomacy and are struggling to overcome its difficulties and identify new opportunities.

But one of the participants, Salam Kawakibi from Syria, seemed preoccupied with other things. Since the war forced him to leave his homeland, he has been teaching political science at Paris University. 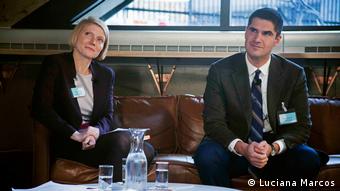 Cathyrn Clüver from the Harvard Kennedy School and Harout Chitilian from the Montreal City Council attended the Lab.

But he still has a strong bond with his former students in his home country: With support from the Swedish government he was able to set up an online platform to reach out to students in Syria. Kawakibi puts all his teaching material online, including videos of his lectures. Hundreds of students in Syria use the platform. It is an example of how governments can cooperate with private individuals.

When the panel on Smart Cities was over, the GDL participants visited a "Coworking-Space" in Montreal. It's a place where creative individuals, freelancers and startup companies work together.

Fatene Ben Hamza, one of the GDL participants from Tunisia, was thrilled to see this. Back home she works with local groups and is keen to make grassroots initiatives flourish.

"We have to empower local groups," she said.

She believes that in countries with high corruption, or dysfunctional governments, such groups can take on an important role to bring about changing the administration.

"We need to create platforms to reach out to average citizens and engage with them. I take a lot of inspiration from the panels here and maybe this will be the basis of a discussion with the mayor of my home town," said the Tunisian activist. 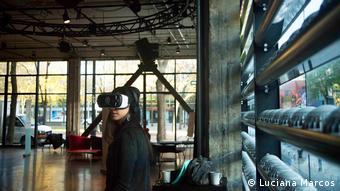 Virtual reality is a novelty for diplomats.

This is exactly what the organizers of the Global Diplomacy Lab had in mind.

The next Lab is to take place in Buenos Aires, Argentina, in June of 2017 – it will be dealing with the topic of how local networks can help prevent atrocities from taking place.