EU Council President Charles Michel has said the law risks "undermining the rule of law" and that the council "deplores" the decision. Meanwhile, the US has withdrawn preferential economic treatment for the territory. 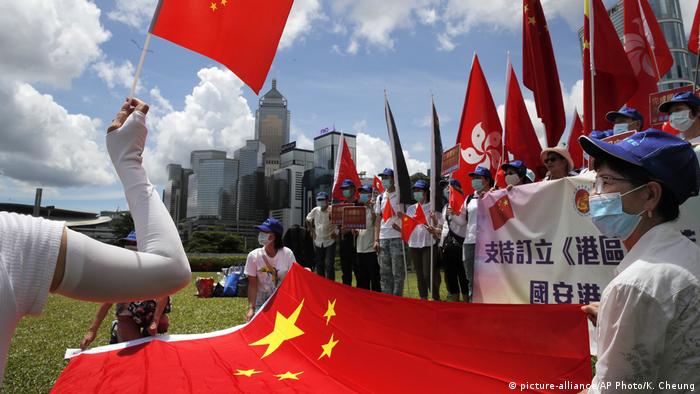 Beijing's move to approve a highly controversial security law on Hong Kong has spurred a wave of criticism and concern on the part of several world leaders, including the European Union's top chiefs.

Japan, Taiwan, the European Union and the United States also denounced the law, which critics say infringes on the territory's autonomy and could be used to quash dissent.

Chinese authorities have defended the law, calling it "sword" hanging over the heads of those who endanger national security.

Chinese media only released the full text of the law after it went into effect on Tuesday afternoon. Under the law, secession and subversion are now punishable by a maximum sentence of a life in prison, and the same applies to "collusion with foreign powers."

EU Council President Charles Michel said the new measure risks "undermining the rule of law," and that the council "deplores" the decision. The head of the European Commission, Ursula von der Leyen, added that the bloc is now discussing any possible response measures with "international partners."

"We've made clear on several occasions, including in our direct contacts last week with the Chinese leadership, that the new legislation does not conform with Hong Kong's basic law, nor with China's international commitments," said von der Leyen. "We're seriously concerned about it."

"Access to the market for Chinese goods could be blocked if [China] will not respect international responsibilities and duties [it] subscribed to," added Schulz, who served as EU Parliament chief between 2012 and 2017.

NATO Secretary-General Jens Stoltenberg joined the outcry, saying "It is clear that China does not share our values, democracy, freedom and the rule of law."

The parliament also recommended that the EU file a case with the International Court of Justice once the law was passed.

Germany should cancel the next EU-China summit over the law,  the head of the Bundestag's Human Rights Committee told DW.

Opposition lawmaker Gyde Ejnsen said that the September summit, already delayed due to pandemic-related reasons, should be scrapped altogether for "national-security-law-passing-reasons."

"It is about the fact that Beijing and the Communist Party is breaking rules, is breaking international law, and there need to be consequences," she said, adding the such summit serve as "propaganda" with the EU and Germany playing along.

Ejnsen, who represents the pro-business FDP party, criticized Germany's top diplomat Heiko Maas for wanting to proceed with the meeting.

The foreign minister "is making a grave mistake, because Germany has so far been very silent" on the law, Ejnsen told DW, adding that Chancellor Angela Merkel should put out a statement condemning the law.

"We will set out our response in due course," he added.

British officials said they will review whether the law breaches a 1984 joint declaration signed between Britain and China under which Hong Kong's autonomy, rights and freedoms would remain in place for at least 50 years.

UK Foreign Minister Dominic Raab said the British government is in talks with international partners about the new law.

"China has chosen to break their promises to the people of Hong Kong and go against their obligations to the international community," Raab said in a tweet, adding that the UK "will not turn our backs on the commitments we have made" to Hong Kong.

Prior to the passage of the law, the United Kingdom said it would amend immigration measures to make it easier for Hong Kong residents to move to the country, if the security law was implemented.

Following reports of the passage, the US enacted measures to withdraw preferential economic treatment, and announced it would bar defense exports to the territory.

Under the new measures, the US will soon require licenses for the sale of items to the territory, that have both civilian and military uses.

"Today, the United States is ending exports of @StateDeptPM controlled US origin defense equipment and sensitive @CommerceGov controlled dual-use technologies to Hong Kong. If Beijing now treats Hong Kong as "One Country, One System," so must we," tweeted Secretary of State Mike Pompeo.

"The United States is forced to take this action to protect US national security,'' Pompeo said in a statement. "We can no longer distinguish between the export of controlled items to Hong Kong or to mainland China. We cannot risk these items falling into the hands of the People's Liberation Army, whose primary purpose is to uphold the dictatorship of the CCP by any means necessary.''

"The legislation will not undermine 'one country, two systems' and Hong Kong's high degree of autonomy,'' she added.

At an earlier news conference she acknowledged there had been widespread public speculation and concern regarding the regulation. She also responded to the US move to stop preferential trade treatment for the territory.

"No sort of sanctioning action will ever scare us," Lam said. Meanwhile, the law spurred both pro-China and pro-democracy street protests around Hong Kong on Tuesday.

If China has passed a national security law for Hong Kong despite "deep concern among Hong Kong citizens and the international community, that would be regrettable," Japanese government spokesman Yoshihide Suga told a news conference.

The move "would erode the trust of the international community in the one country, two systems principle," he said.

"The one country, two system is very important for Japan as we have close economic ties and human exchanges with Hong Kong."

Read more: Will China's new national security law for Hong Kong be the end of autonomy in the territory?

Taiwan President Tsai Ing-wen said the "one country, two systems" model of governance has proven to be a failure because China abandoned its promises to maintain a high degree of autonomy for 50 years after the 1997 handover from British rule.

"It's very disappointing that China fails to keep its promises," Tsai said. "The model of 'one country, two systems' doesn't work," she said. Taiwan has routinely rejected China's plan to apply the same model to the self-governing island.

Tsai said that Taiwan had also made a plan to offer humanitarian assistance. "Our Taiwan-Hong Kong Services and Exchanges Office will open tomorrow to further facilitate humanitarian aid," said Tsai.

The new office is expected to include special services for Hong Kongers seeking opportunities to study, work or invest in Taiwan, according to a statement issued by the Mainland Affairs Council, Taiwan's top government agency on Beijing policy.

The precise wording of the security law remains a secret, but China has said it will outlaw acts of subversion, secession, terrorism and collusion with foreign forces.