Chernov: 'Every Ukrainian and international journalist on this stage would gladly exchange all the awards in the world for the Russian invasion in Ukraine to never happen.' 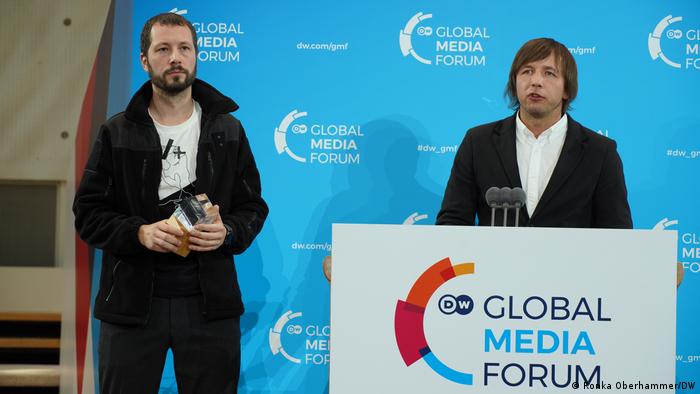 "Sometimes, information is more important for human survival than even food. That thought allowed us to keep working, even when it was becoming harder every day," said journalist Mstyslav Chernov at the DW Freedom of Speech Award ceremony in Bonn on Monday. "The tragedy of Mariupol will forever remain like a big scar on my body and my heart, but at the same time I feel that the work we did, documenting the horror of the war, will help the world to understand what happened in Ukraine and will bring justice to the thousands killed in a senseless war," photojournalist Evgeniy Maloletka said. The two Ukrainians are this year's recipients of Freedom of Speech Award.

Director General Peter Limbourg: "The Freedom of Speech Award has gone to laureates on all continents. Each time we wanted to highlight one of the most pressing issues of our time. And this year, we are giving the award to two journalists who have been covering an all-out war in the middle of Europe. When I saw the pictures, read your report, I understood for the first time what is really going on. It is really hard to send out journalists into warzones. We are very proud to have you here."

Award winner Maloletka said in his acceptance speech: "For me, the war in Ukraine started eight years ago, when I worked as a photographer during the Euromaidan protest, in Crimea in March 2014, and then in Donbas. During the first two years of the war, we were in various dangerous situations, but it cannot be compared to what I had to see this year. … During our 20 days in Mariupol, we witnessed war crimes, air strikes, and atrocities against civilians committed by the Russian forces. It was important for me to show the world and our country what’s happening, the fear and pain of the Ukrainians." He added: "I had seen a lot of human suffering before Mariupol but had never seen so many children killed in such a short period of time" and that he hopes their work "will bring justice to the thousands killed in a senseless war." 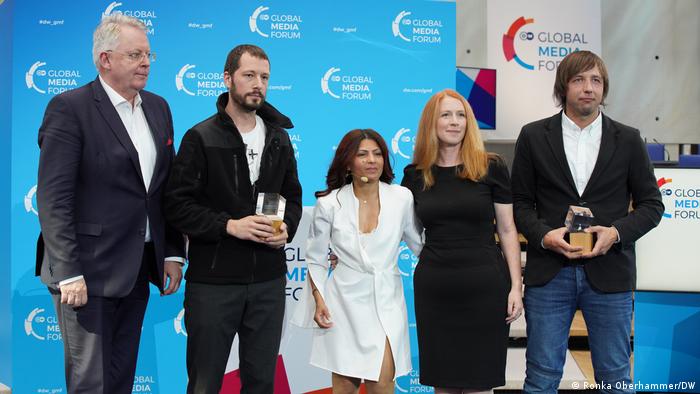 Award winner Chernov said in his acceptance speech: "Every Ukrainian or international journalist on this stage would gladly give away all the awards in the world for the Russian invasion in Ukraine to never happen in the first place. Nevertheless, we are very grateful. This is an important recognition and support for us. … Mariupol quickly fell into chaos, and we did not understand why at first. And then we understood. There was simply no information coming in or out of the city. People put up signs to know if Kyiv was still standing, to know about Kharkiv, Odessa, Kherson, no information on whether people’s relatives are alive, whether the humanitarian corridors are open. So, people panicked. Sometimes, information is more important for human survival than even food. That thought allowed us to keep working, even when it was becoming harder every day."

The two journalists, who will return to Ukraine to continue their reporting, dedicated the DW Freedom of Speech Award to fellow Ukrainian journalists. Chernov said: "I want everyone to understand that what we did is nothing extraordinary; it is what every journalist in Ukraine is doing right now. … They take the same risks that we did. We dedicate this Award to the journalists working in Ukraine. If they don’t, this war will go on and on and on. Thank you that freedom of speech is not just supported by speeches. Please keep supporting freedom of speech, independent journalism and unbiased reporting."

The Freedom of Speech Award honors the reporters' coverage of the Russian war of Ukraine from the embattled city of Mariupol in February 2022. Their report "20 days in Mariupol" offers a unique account of Mariupol under siege. The last journalists left in the city, Chernov and Maloletka documented the deaths, devastation and bombing of a maternity hospital in Mariupol. 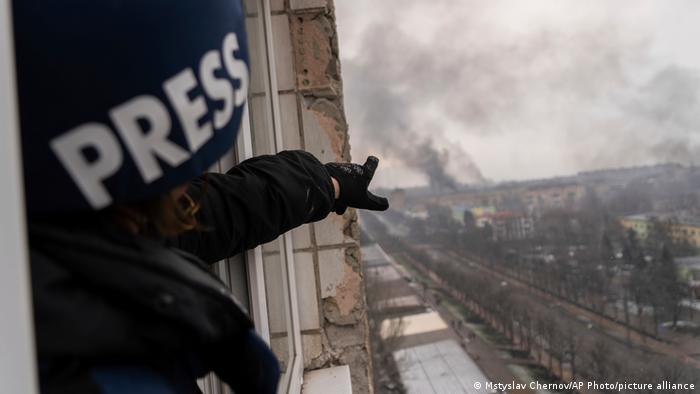 Jodie Ginsberg, president of the Committee to Protect Journalists (CPJ), said in her laudatory speech: "Journalists play a crucial role in holding the powerful to account, in exposing corruption, challenging injustice, and shining a light on the key issues of our age. … Telling the truth comes at a price.

"A culture in which attacks on journalists go unpunished … create[s] a climate in which journalists are considered fair game – where they are seen no longer as human beings but targets.

"That creates extra complexity in a situation of war, where truth is so often the first casualty and where those seeking to tell the truth face not only the physical risks faced by anyone in the midst of conflict, but whose very existence is a threat to the antagonists.

"It is in that context that the work of AP journalist and novelist Mstyslav Chernov and freelance photojournalist Evgeniy Maloletka, both from eastern Ukraine, is particularly remarkable.

"The role of a journalist – in war as in peace – is to bear witness. Or in Mstyslav's words: to break the silence. The Freedom of Speech Award for Mstyslav and Evgeniy recognizes their exceptional work in standing up against propaganda and misinformation, in bearing witness, in breaking the silence." 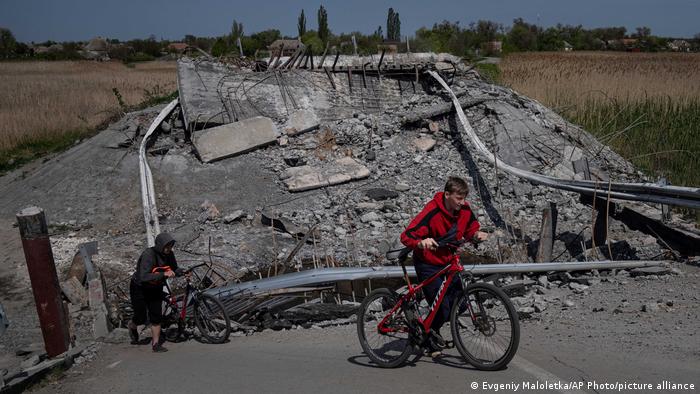 Teenagers on bicycles pass a bridge destroyed by shelling near Orihiv, Ukraine, on May 5, 2022 (Photo: Evgeniy Maloletka, AP).

Ensaf Haidar, wife of Saudi blogger Raif Badawi who received the Freedom of Speech Award in 2015 and was released from prison in March after serving a ten-year sentence but has not been allowed to leave Saudi Arabia and join his family in Canada, said in her speech: "Raif and I were honored to be awarded the first edition of the Freedom of Speech Award by DW, and I'm honored to be here today handing it over to two of the world's bravest journalists, Mstyslav and Evgeniy. These two brave journalists proved with unprecedented courage that they are not afraid of the tanks of the criminal Putin. Their weapon is the camera and conveying the truth in every way possible with professionalism, peace and courage."
In a video statement, German Foreign Minister Annalena Baerbock lauded DW Freedom of Speech Award honoring Chernov and Maloletka: "I'm delighted that the Global Media Forum is honouring them with the Freedom of Speech Award today. They stand for the courage of hundreds of journalists reporting from Ukraine."

The DW Global Media Forum is Germany's only international conference for representatives of the media from all over the world. Together with its main partners, the German Federal Foreign Office, the State of North Rhine-Westphalia, the Foundation for International Dialogue of the Savings Bank in Bonn, the Federal ministry for Economic Cooperation and Development and the City of Bonn, DW offers media professionals a unique opportunity for interdisciplinary discussions with opinion-leaders from different fields around the pressing issues of our time.

Ukrainian journalists Mstyslav Chernov and Evgeniy Maloletka have won DW's Freedom of Speech Award for their work documenting the siege of Mariupol. They explain why they intend to return to the front lines.