Following two years of digital events, the DW Global Media Forum was finally held again in person on June 20 and 21. Delegates from all over the world had a chance to partake in Germany's international media conference. 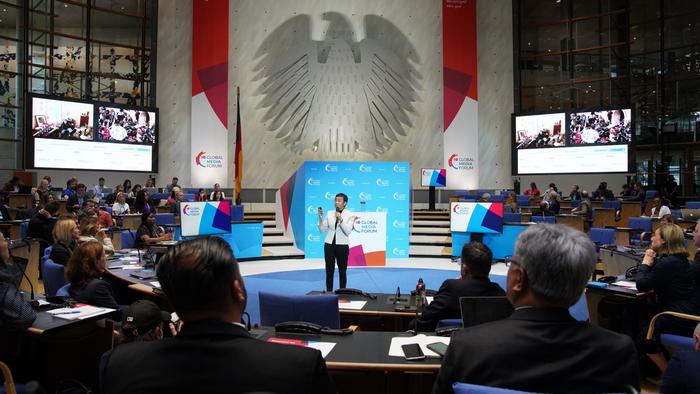 There was a sense of reunion in the air when the DW Global Media Forum opened its doors on the morning of June 20, 2022 to welcome more than 2,000 media professionals from all around the world once again — both in person at the World Conference Center Bonn as well as online.

Most participants had not had the chance to be in a room with so many other people for two years during the COVID-19 pandemic. Do we shake hands? Do we stick to fist bumps? Or is it time to warmly embrace each other after such a long absence, celebrating the 15th birthday of the conference?

In a day and age which is marked by growing divisions, and where journalists have to face increased animosity, authoritarianism and censorship, the DW Global Media Forum decided to look at ways in which we can all be part of constructive change by “Shaping tomorrow, now” together.

The opening ceremony was marked by this excitement, as 2021 Nobel Peace Prize laureate Maria Ressa took to the stage and welcomed the participants coming from more than 100 countries with one question on her mind: What are you willing to sacrifice for the truth?

Sharing details from her personal experience as the CEO and editor-in-chief of Rappler as well as drawing on examples from other parts of the globe, Ressa showed how lies are designed to spread much faster in the digital realm than facts and, ultimately, the truth. She went on to stress that without the truth, trust in our public institutions, our governments and our leaders is completely eroded, threatening the very foundations of our democratic values.

Ressa's message resonated with the roomful journalists and media professionals in Bonn as well as those joining online. Her message of fighting for the truth also created a seamless transition into the first panels of the morning, which examined the role of journalism in times of war. 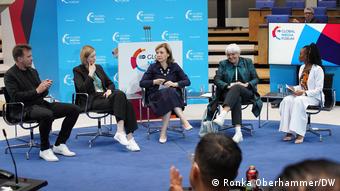 Panel on "Shaping the future of journalism in wartimes" with (from left to right): Mikhail Zygar, Angelina Kariakina, Věra Jourová, Claudia Roth and Edith Kimani

Panelists including the European Commission's Vice President for Values and Transparency Věra Jourová and Germany's Federal Government Commissioner for Culture and Media Claudia Roth debated the growing interplay between reporters and authorities in these volatile times.

To explore whether the red lines between reporting and activism are blurred in the current media landscape, another panel followed to examine the boundaries of journalism at the intersection with activism: Where does journalism end and activism begin? 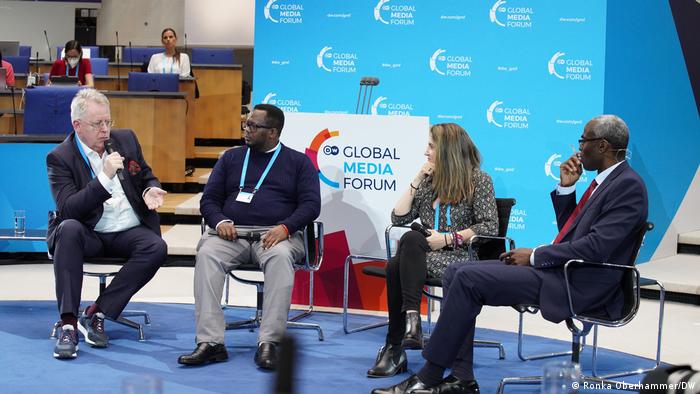 To explore this question, DW's Director General Peter Limbourg was joined by investigative journalist Patricia Toledo de Campos Mello from Brazil and journalism trainer Kiundu Waweru from Kenya, examining changing trends from around the world in journalism together.

But there was much more to discover than panel discussions and presentation at the DW Global Media Forum 2022. Participants could also join the production of DW's successful talkshow format JaafarTalk, discover the importance of the work our partner organizations are committed to, and network with likeminded individuals from scores of countries..

Fighting for truth in a war zone 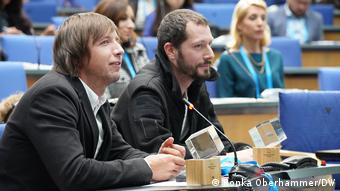 At the end of day one, DW held its annual DW Freedom of Speech Award ceremony, which highlights the outstanding work of individuals fighting for a free press and freedom of expression each year.

In 2022, the award went to two journalists from Ukraine: photojournalist Evgeniy Maloletka and visual journalist Mstyslav Chernov were honored for their agonizing report, Twenty days in Mariupol, which was produced for The Associated Press (AP) in spring 2022.

At certain times, Chernov and Maloletka were the only reporters on the ground sending images back to broadcasters around the world from Mariupol, showing the devastation and brutality of a city under siege by Russian attacks.

Chernov said that their presence in Mariupol was instrumental in getting the harrowing images of the war out into the world and inform the public about what truly was happening: "With no pictures of demolished buildings and dying children, the Russian forces could do whatever they wanted," he told DW. "I have never felt that breaking the silence was so important."

Maloletka added that the work he and Chernov undertook in Mariupol will also "help the world to understand what happened in Ukraine, and will bring justice to thousands killed in a senseless war."

A standing ovation ensued lasting several minutes, and echoing beyond the plenary chamber of The World Conference Bonn.

The big issues in newsrooms today

The second day of the DW Global Media Forum 2022 took a deeper look at reporting from conflict situations, with a panel discussion focusing on reporting from the frontlines of war. Exploring how journalists can better equip themselves to deal with the pressures and the strain of reporting from conflict zones, participants explored the importance of adhering to journalistic principles and also discussed ways to combat disinformation campaigns during armed struggles.

Various other conference formats also took a dive into some other concrete issues affecting the news industry in 2022. From problems including inequalities in reporting standards to growing online censorship and restrictions to free information to establishing greater diversity and inclusion in newsrooms, a series of panels featuring award-winning journalists like Barkha Dutt from India, Wolfgang Blau from Germany and Aye Min Thant from Myanmar examined the present and future hot topics of the industry.

There even was an impromptu musical interlude by Ugandan politician and musician Bobi Wine. Day two was also characterized by an in-depth look at technology, with the DW Global Media Forum start-up contest announcing the winner of the 2022 competition: out of nearly 100 participants from around the world, LeadStory from Australia won the competition with its work in aggregating news content using an algorithm that deliberately works against filter bubbles and echo chambers.

An undoubted highlight for many attendants was the lecture by American historian Timothy Snyder, who drew some terrifying parallels between the Russian-engineered Holodomor famine campaign in Ukraine 90 years ago and the current Russian invasion of Ukraine, in a talk titled: Media coverage in times of crises: Lessons from the past and ideas for tomorrow | Timothy Snyder 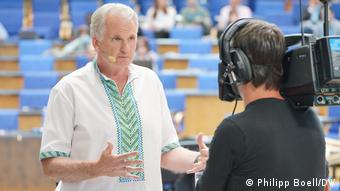 "In order to get any kind of perspective on the future, it also helps to have some history," Snyder emphasized in his speech.

Snyder's message served as yet another stark reminder of the important work that journalists have to do often under harrowing circumstances, risking their lives to get out the truth.

Hendrik Wüst, Minister President of the Federal State of North-Rhine Westphalia, referred to that truth as "one of the cornerstones of a free and democratic society" in his video message at the DW Global Media Forum.

"The war of information (in Ukraine) is a dire reminder of the crucial importance of free and independent journalism," Wüst added. 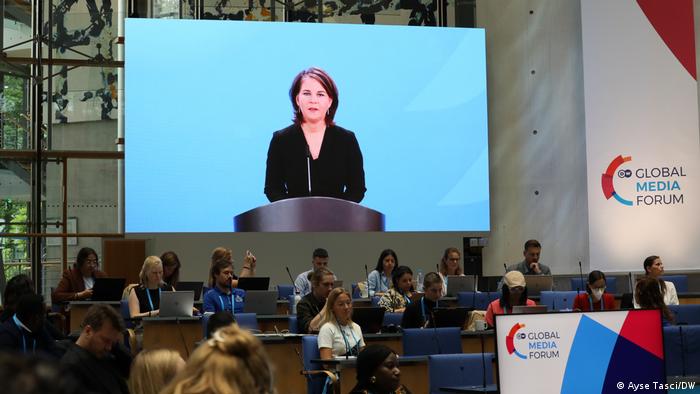 German Foreign Minister Annalena Baerbock, who also contributed a video message to the conference, also praised the important work of journalists today, stressing the fact that a free press must not be silenced, and addressing the journalists attending the conference directly by saying: "Thank you for you commitment, and thank you for your bravery."

Baerbock finished her message, emphasizing the importance of journalism in the face of increasing political and government interference in the free press globally: "Your voices are needed because the truth is indispensable — in Mariupol and in Moscow, in Brussels and in Bonn."

This article was written by Sertan Sanderson.

Stay connected with DW's Global Media Forum. Subscribe now and stay tuned for the latest updates on talks, insights and the conference in 2022.

What are you willing to sacrifice for the truth? | Maria Ressa at the DW Global Media Forum 2022