From shortwave radio to digital media outlet: The German foreign broadcaster's success story from 1953 to date. 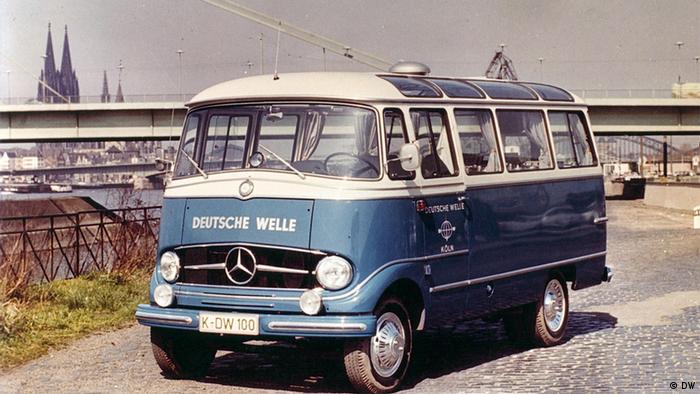 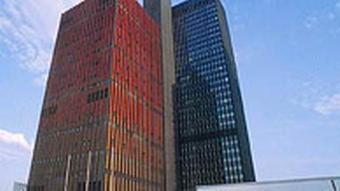 From the beginning of the 1980s until the move to Bonn in 2003, the broadcasting center of DW was located at the Raderberggürtel in Cologne.

On May 3, 1953, DW radio goes on air for the first time from Cologne. Founded by the German federal government, it is intended to communicate the values of the young republic to other countries and to support Germany's readmission to the international community.

Initially, DW broadcasts only via shortwave and in German. The first foreign languages are added as early as 1954; by the end of 2021, there will be 32. 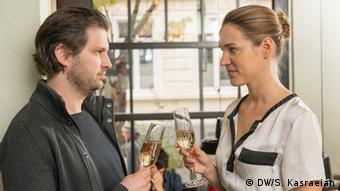 The program "Learn German at Deutsche Welle" starts in 1957. Almost 50 years later, in 2005, the promotion of the German language becomes an explicit part of DW's programming mission.

DW offers interactive exercises for students and teachers on the Internet, for example the popular telenovela "Jojo sucht das Glück" (Jojo’s search for happiness) or a mobile language course for refugees and migrants. 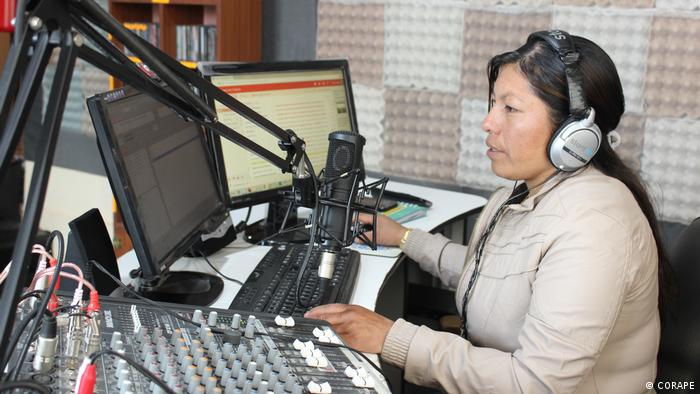 In July 1964, international radio journalists take part in the first training course for media professionals from developing countries. This marks the beginning of a huge success story: Just one year later, the Deutsche Welle Training Center (DWAZ) is launched. Since then, hundreds of journalists, technicians and radio station managers from Africa, Asia and Latin America have completed a wide range of training courses every year. 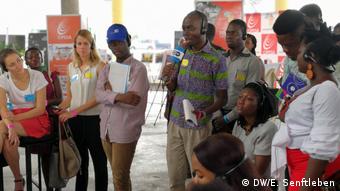 In 1996, DWAZ merges with the TV training center of Sender Freies Berlin and becomes the DWFZ (Deutsche Welle Fortbildungszentrum) and in 2003, the DW Akademie. Today, the DW Akademie is DW's center for international media development, journalistic training and knowledge transfer.

Warsaw Pact troops put an end to the "Prague Spring" in Czechoslovakia in 1968. DW responds by expanding its offerings in its Eastern European broadcast languages. This is the start "DW crisis radio": After the invasion of Soviet troops in Afghanistan in 1979, DW expands its broadcast languages to Dari and Pashto. In 1989, DW expands its Chinese shortwave programming in response to the Tian'anmen massacre in Beijing. 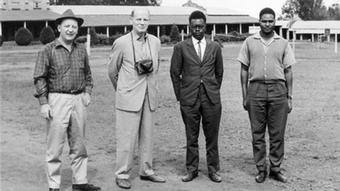 Staff of the DW relay station in Kigali, Rwanda

The civil war in Rwanda in 1994 affects DW directly: The employees of the relay station in the capital Kigali are trapped. Eleven German employees are flown out by Belgian forces. Four of them return soon after at the request of the new Rwandan government and start to operate again.

In the 1990s, events in war-torn Yugoslavia and the transformation process in post-communist societies shape DW’s journalistic work. DW provides for its audience Southeastern Europe in Albanian, Bosnian, Serbian, Macedonian and Croatian.

On April 1, 1992, DW launches a daily television program from the premises of the RIAS-TV station in Berlin. It aims to meet the growing demand for information from and about Germany after reunification in 1990. DW today has four television channels: English, German, Arabic and Spanish. 1998: Federal Ministry for Culture and Media

After almost 40 years, legal supervision of DW is transferred from the Federal Ministry of the Interior to the Federal Government Commissioner for Culture and the Media following the national elections. State ministers since 1998: Michael Naumann (SPD), Julian Nida-Rümelin (SPD), Christina Weiss (independent), Bernd Neumann (CDU) and, since 2013, Monika Grütters (CDU). 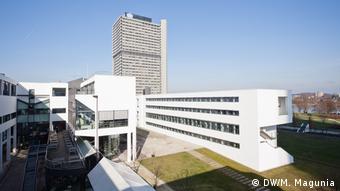 After 50 years in Cologne, DW moves to nearby Bonn, Germany's former capital. The famous Schürmann Building was originally designed by architect Joachim Schürmann as an office building for the members of parliament. However, the government moved from Bonn to Berlin years before construction was finished.

DW's first international media conference, the Global Media Forum (GMF), takes place from June 2 to 4, 2008 at the World Conference Center Bonn. Keynote speeches are given to around 800 guests from all over the world by then-Foreign Minister Frank-Walter Steinmeier and Nobel Peace Prize laureate Shirin Ebadi. 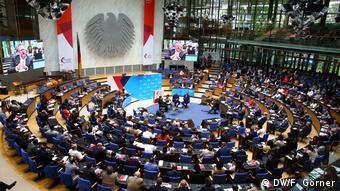 Erik Bettermann, DW Director General from 2001 to 2013, says at the first GMF opening session: "With this regular event, we are bringing the expertise of a multinational, globally networked media company to create a platform for intercultural exchange between players in globalization. Here, media representatives from around the world work with decision-makers from politics, culture, business, development cooperation and science to find interdisciplinary solutions to global challenges in which media play a central role."

Every year, some 2,000 experts from the media, politics, culture and society come to Bonn from well over 100 countries to attend the Global Media Forum. The GMF has established itself as the largest international media conference in Germany - as "the place made for minds." 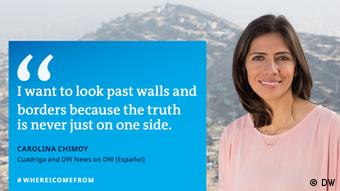 DW Campaign "Where I come from"

2011: Diversity as a success factor

Since 2011, DW has been one of the members of the German employers' initiative "Charta der Vielfalt" (Diversity Charter). The association is committed to promoting diversity in the work place. 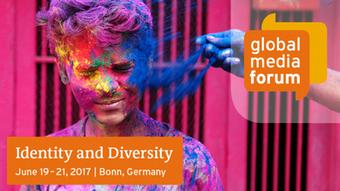 Director General Peter Limbourg is elected to office in 2013. Under his leadership, the English-language 24-hour news channel goes on the air in June 2015. The new TV channel offers magazines, documentaries, interviews and talk shows on topics from politics, business, science, culture and sports. A news program is broadcast on the hour, with different duration depending on the time of day. The current program can be interrupted at any time for "breaking news" at any time. 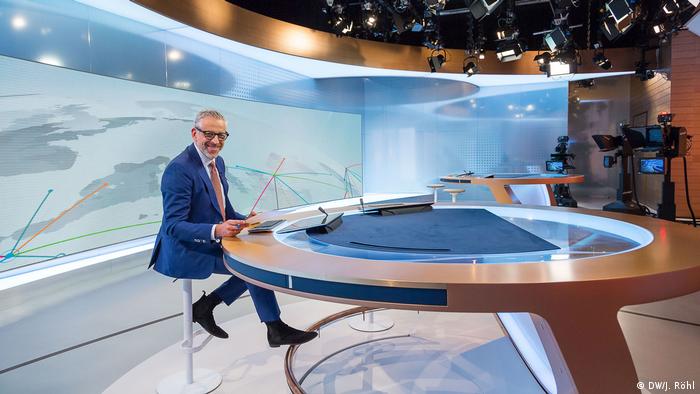 The DW News studio in Berlin with presenter Gerhard Elfers

Digitization is making its way into everyday newsroom life, leading not only to new technical equipment and transmission methods, but also to new workflows. The increasing use of the Internet contrasts with the declining interest in shortwave broadcasting. At the end of October 2011, DW discontinues German-language radio programs via shortwave and focuses on multimedia formats.

Since 2015, DW has presented the Freedom of Speech Award annually as part of the Global Media Forum to individuals or initiatives that are particularly committed to human rights and freedom of expression. 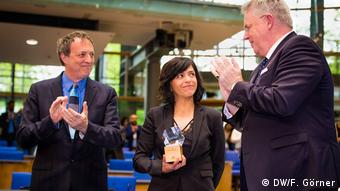 In 2020, DW honored 17 journalists from 14 countries, representing all journalists worldwide who have disappeared, been arrested or threatened for their reporting on the Corona crisis. 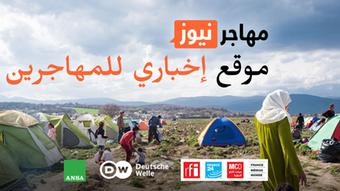 Crises shape world politics, and the topics of flight and migration are gaining in importance for reporting. With its cooperation partners France Médias Monde and the Italian news agency ANSA, DW is launching the online project InfoMigrants in March 2017, which from 2021 on will be offered in six five languages and is funded by the EU. The information platform is aimed at migrants and refugees.

Pope Francis conveys his "sincere appreciation for this important initiative" in a personal letter.

DW celebrates its 65th anniversary with a ceremony attended by German Chancellor Angela Merkel and State Minister Monika Grütters, as well as 350 guests from politics, culture and the media, in Berlin on June 5. 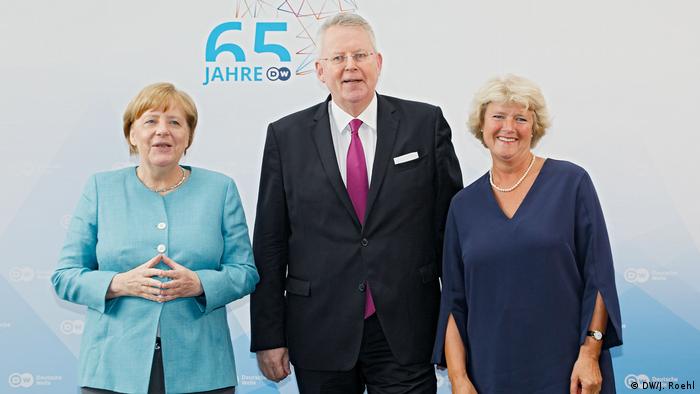 Chancellor Merkel says DW has established itself as "the voice of the homeland and the voice of freedom. It is part of the media history of the Federal Republic of Germany." DW is "valued as a reliable partner in the world" and is "more in demand than ever."  The DW Akademie also does "work for freedom, for democracy," Merkel says.