Since the 2013 Gezi Park Istanbul protests in Turkey, nothing has been the same. Erdogan's declaration of war against independent media coincides with this milestone, writes DW Editor Bülent Mumay for DW's Weltzeit. 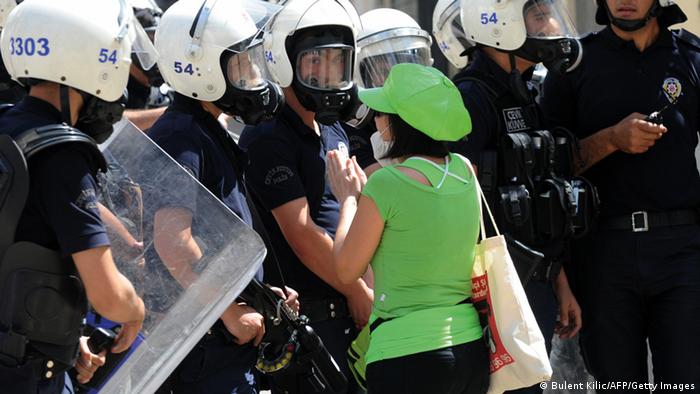 A woman asks riots police to stop as they clash with Turkish protesters on June 1, 2013, during a protest against the demolition of Taksim Gezi Park, in Taksim Square in Istanbul.

The milestone in the books to be written on both the political and media history of Turkey in the future will be a common one. After the protests that started in Gezi Park in the heart of Istanbul in May 2013 and spread all over Turkey, nothing has been the same. Erdogan's decision to move Turkey to autocracy and his declaration of war against independent media coincides with this milestone.

After Erdogan came to power in 2002, he made reforms that were pleasing to the West in order to liquidate the domestic power centers. However, as soon as he felt that he had reached the peak of his power, he broke the bridges with democracy. After his re-election with 50 percent of the votes in 2011, he took the judiciary under full control with the constitutional changes he made. The antidemocratic steps he took with this self-confidence led to a huge wave of protests in May 2013. An environmentalist protest that started with Erdogan's announcement that he would build a military barracks and a shopping center in the only green area in Taksim Square, the heart of Istanbul, turned into a national rebellion with the participation of all segments that Erdoğan had victimized.

Like every "autocratic" father, this wave of rebellion inflamed his anger even more. Upon his instructions to the police, the government's reaction to the riots resulted in the deaths of about 10 young people. It was not only the protesters who lost in the end, it was a process in which the mainstream media in Turkey died out as well. Erdogan, who took steps such as getting some journalists and columnists fired and suing cartoonists who drew him like a cat, managed to completely dominate the media after he had bloodily suppressed the Gezi protests. Mainstream media outlets, which also included opposing views, were taken over by businessmen who had become rich through government tenders. This is how the process that made 95 percent of Turkey's media completely dependent on the Palace began. s

However, this process which started with the Gezi Resistance in 2013, contrary to Erdogan's goal, also led to two positive results in terms of the public's freedom of information. First, alternative media outlets that were born or grew up with the rebellion began to fill the void of independent information created by the now controlled mainstream media. Television, newspapers and internet sites, which started out with very small opportunities instead of big media organizations, started to meet the news needs of citizens in Turkey. The second positive result of Gezi for the media was unexpected. International public broadcasters offering journalistic content in Turkish began to appeal to much wider audiences due to their liberal understanding of journalism and the opportunities they had. Foreign broadcasters, including DW, BBC and VOA, gained great momentum with Gezi. With the employment of talented journalists who lost their jobs with Turkish media under the pressure from Erdoğan, they offered news and information with an effective reach. This is exactly why these international news outlets are being targeted by Erdogan these days. A state agency established to control and basically censor radio and television in Turkey has imposed a license requirement for domestic and foreign news websites, including DW Turkish. DW may soon face an access ban as it refuses to be institutionally subject to such an audit.

The preparations of the Palace to restrict the press organs that it cannot control are not just the imposition of licenses. Very strict legal regulations have been made for digital media. Any news item the government does not like is blocked by decisions of the very busy judiciary, which is completely dependent on the Palace. Social media platforms are also being suffocated under the pretext of fighting "disinformation". Sharing or reporting content that is considered "disinformation" will also be punished with imprisonment. Of course, the government will determines what constitutes disinformation.

However, as Erdal İnönü, a former Turkish politician, said, “The truth has a strange habit of coming out.” Since 2013, none of Erdogan's interventions against the media have prevented the truth from coming out. The light somehow leaked, enlightening the public. Moreover, the media that he cannot control are no longer a marginal or alternative factor as it used to be. Together, they have enough influence to fill the void of the mainstream. Despite its large output volume, media under the control of the Palace have a serious credibility problem. Despite substantive funds being transferred from public sources, none of the mainstream television channels under the control of the Palace can reach the ratings of an opposition channel like Halk TV. Despite employing thousands of trolls, the agenda on social media is still determined by channels outside of the Palace's control. DW Turkish is breaking its own click and view records. At first, we only had an urban and youthful profile. Today, DW reaches the entire spectrum of Turkish society. 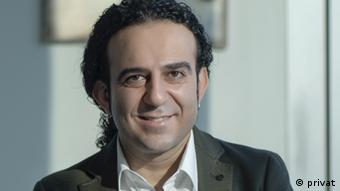 With the 2023 elections approaching, which are of vital importance to Erdogan, he began to toughen his game plan, which he has been implementing since 2013. The prospect of him losing these elections has become a realistic possibility. The deterioration of the economy did serious damage to the support for Erdogan and his ruling party AKP. The odds are not bad for an effective opposition bloc, which is forming against him, of actually winning next year's elections.

For this reason, Erdogan is now exploiting the Gezi protests as an instrument of power. The protests in 2013, in which some 8 million Turks took part, are now being put on a level with a terrorist crime. The judges appointed by the Palace, one of whom was even an AKP deputy candidate, handed down the highest sentence that the Turkish Penal Code could impose on the Gezi Resistance.

Human rights defender Osman Kavala was sentenced to life imprisonment for organizing the Gezi protests. Seven intellectuals were each sentenced to 18 years in prison. Erdogan critic Canan Kaftancioglu, head of the Istanbul branch of opposition Party CHP, has been sentenced to five years in jail for insulting Turkey's president on social media. This is seen as part of a crackdown on opposition to Erdogan ahead of next year's presidential elections. With these steps, Erdogan intimidates both the opposition and the domestic media. However, as a Turkish proverb says, "The sun is not covered with mud." Neither censorship nor pressure can prevent the truth from getting to the public. History books also show that the truth has not changed with court decisions, it still is…