The pro-democracy activist and media tycoon is accused of colluding with foreign forces and endangering national security. He is the most high-profile person to be charged under the sweeping law. 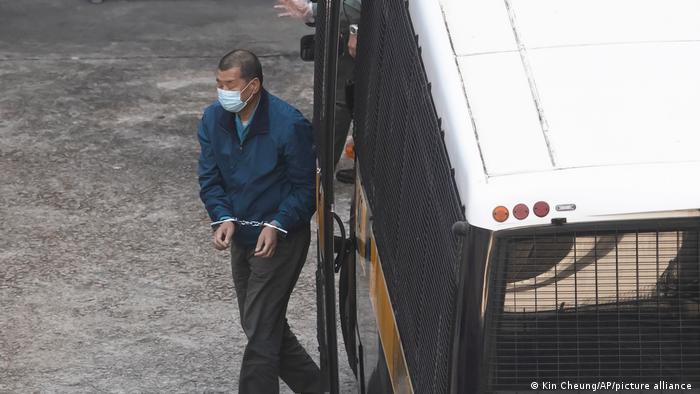 He is suspected of colluding with foreign forces and endangering national security,

Lai, an ardent critic of Beijing, is the most high-profile person to be charged under the law since it was implemented in June.

Jimmy Lai: 'The resistance will go on'

Why was Lai arrested?

The founder of the Apple Daily is a frequent visitor to Washington, where he has met officials including US Secretary of State Mike Pompeo to rally support for Hong Kong's pro-democracy movement.

Lai, 73, was also arrested under the security law in August. He and two executives of Next Digital, the company that operates the Apple Daily newspaper, were later charged with fraud over accusations that they violated lease terms on office space for the company. Lai was denied bail earlier this month. He is expected to apply for bail on that charge on Tuesday.

How many arrests have been made under the national security law?

Lai is just the fourth person to be charged under the controversial legislation. The others are a 19-year-old activist, who allegedly promoted secession on social media, a man who rode his motorbike into police officers at a protest and a man who repeatedly shouted pro-democracy slogans at police.

Hong Kong's sweeping security law has been condemned by the West and human rights groups as a tool to quash dissent. Authorities in Hong Kong and Beijing say it is necessary to tackle holes in national security exposed by months of sometimes violent anti-government protests last year.