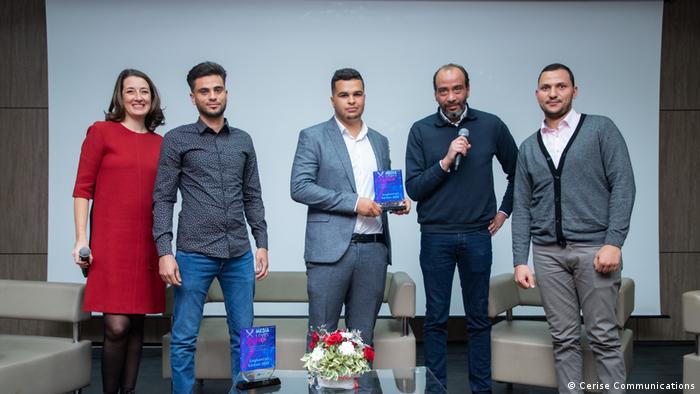 Journalists everywhere have seen that strong writing and reporting skills are often not enough to reach audiences and run a media outlet in today’s complicated and turbulent world.

Technology can help, both in streamlining work and helping media outlets generate revenue. Initiative and out-of-the-box thinking have become ever more critical.

With this in mind, and since 2018, the DW Akademie media incubation project MEDIA LOVES TECH has aimed to join journalism and the startup world, specifically in North Africa. Funded by the Federal Ministry for Economic Cooperation and Development (BMZ) and in collaboration with Tunisian media NGO Al Khatt in Tunisia, the idea is to recruit, promote, develop and test new ideas for the media sector.

From idea to market

MEDIA LOVES TECH, which supports eight to 12 startups annually with each project cycle lasting several months, aims to get projects from idea to prototype to market entry. To date, MEDIA LOVES TECH has worked with 50 teams from Tunisia, Morocco and Algeria, and is receiving funding to cover its activities until 2025. The participating startups have tackled challenging topics such as climate change in North Africa, how photojournalists can protect and monetize their work, and how to get reliable financial data to journalists covering business.

This month, at the end of the 2022 incubation cycle, a MEDIA LOVES TECH panel evaluated this year’s start-up participants. They assessed the projects’ feasibility and viability, but also the teams’ commitment, the work accomplished during the incubation phase and their ability to achieve their objectives. Monetary prizes were given out based on how the startup is advancing the public good, and how users are benefiting from the new way of communicating news.

"Impact measurement in the unstable startup area is a challenge,” said Vera Möller-Holtkamp, DW Akademie’s Program Director for Tunisia. “In general, it is often said that over 90% of startups go under in the first two years. Still, start-ups are considered a valuable avant-garde of economic development that has a stimulating effect on the ecosystem as a whole. Even if initiatives do not survive, their traces can be found in the ecosystem."

While eight teams were selected at the start of the incubation, only five completed the program. This year’s participants were required to report more often on their progress throughout the year, in effect spurring the entrepreneurial spirit.

Focus on new parents and the hearing impaired

This year’s grand prize of €10,000 went to MOOM, a Tunisian digital media platform geared to expectant mothers and young parents, offering them factual information and useful tips for navigating pregnancy and early childhood.

"MOOM fills a gap in Tunisia by addressing a target group looking for reliable information and ignoring existing taboos in Tunisian society about pregnancy and parenthood,” said Project Manager Paul Schütte. “There is a dynamic presentation and tutorials. It’s also an e-commerce site with carefully chosen products, ensuring the project’s financial sustainability.”

An Impact Prize of €4,000 was awarded to the technological tool "MSign," a virtual avatar developed in Tunisia that translates Arabic text, sound and video into sign language in real time. This particular prize reflects both recognition and encouragement, spurring the MSign team to develop their product despite numerous challenges.

"Access to information for the hearing impaired is a major challenge that many international players are trying to meet,” said Malek Khadhraoui, founder of NGO Al Khatt. “There is still a market to be conquered in this field, in the Arabic-speaking world as elsewhere, especially for the media.”

"Promoting new quality media projects with viable business models in an economically and politically unstable environment, is a constant challenge,” emphasized Möller-Holtkamp. “After five years, this project is still going strong. Twelve tools, digital media concepts and young digital media are still active after the incubation period and they already are making a difference innovating plural journalism in North Africa.”

MEDIA LOVES TECH is an initiative of DW Akademie, Deutsche Welle's center for international media development, journalism education and knowledge transfer. In cooperation with Al Khatt, a Tunisian NGO working for freedom of the press and of expression, it aims to be a laboratory and think tank  for the future of journalism. MEDIA LOVES TECH is funded by the Federal Ministry for Economic Cooperation and Development (BMZ).