Polish LGBTQ activists refuse to be silenced by lawsuits

The founders of a website exposing LGBTQ discrimination in Poland are being sued by a legal association that is using gaslighting tactics. Though faced with expensive lawsuits, the activists will not be stopped. 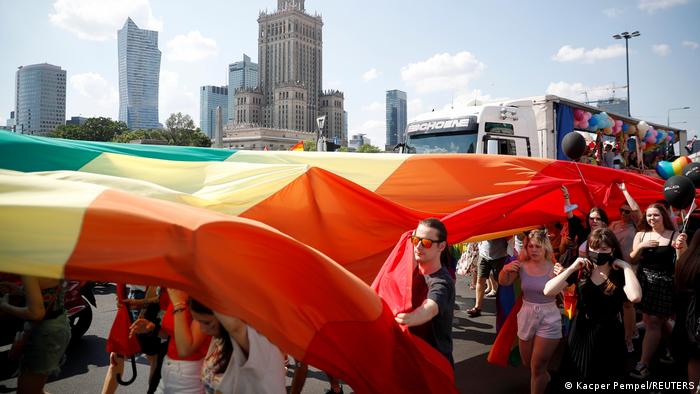 "Our family charters are not against any group," Nikodem Bernaciak told DW from the offices of the Ordo Iuris Institute in Warsaw.

On July 20, in Ostroleka, this conservative legal organization is to open the first of at least six lawsuits against four LGBTQ activists. The lawsuit accuses the founders of The Atlas of Hate website of slander for falsely accusing municipalities of LGBTQ discrimination over their so-called Family Rights Charters.

"There is not a single word about LGBT people in the charter, and the acronym does not even appear," Bernaciak argues.

The four people facing trial are Kuba Gawron, Kamil Maczuga, Paulina Pajak and Pawel Preneta. They founded The Atlas of Hate in 2019 after local Polish municipalities began adopting anti-LGBTQ resolutions. The website displays the 92 local municipalities, covering roughly 31% of the country, that have passed either "LGBT-free ideology zone" resolutions or adopted Family Rights Charters written by the Ordo Iuris Institute. 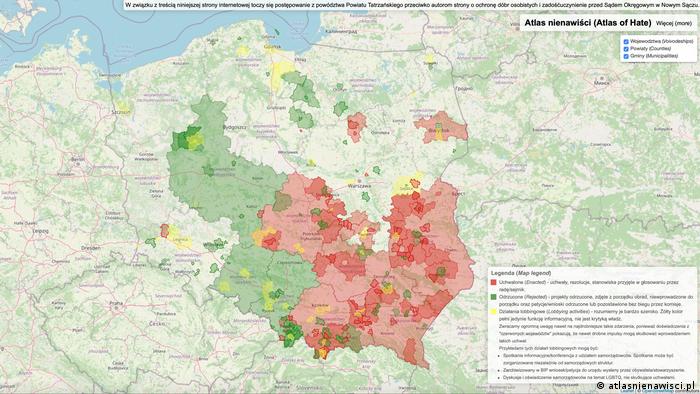 The site helps to expose the depth of LGBTQ discrimination in Poland. In 2020 it was recognized for its work with a nomination for the Sakharov Prize by the European Parliament. The prestigious human rights award was ultimately given to the Belarus opposition movement.

In his interview with DW, Nikodem Bernaciak defended the charters, saying they seek only to protect families.

But since LGBTQ people cannot legally form a family because gay marriage is illegal in Poland, the promotion of such values can be seen as concealed discrimination. 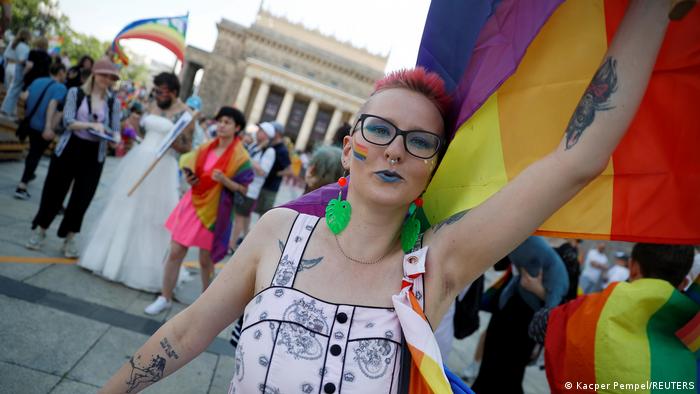 Bernaciak strongly denied that this was the case.

"Poland's constitution has a definition of marriage as a union with only one man and one woman," he told DW. "So even if they feel discriminated, it’s an effect of our constitutional law and not our family charters."

Quizzed on why the family needs protecting, it did not take long for Bernaciak to describe the threat of a so-called LGBT ideology — the phrase the family charters imply but seek to circumvent.

"This is just ideological fashion, and we can simply wait for it to pass away. We should concentrate on the natural order," Bernaciak said.  "It’s just a consequence of nature. There are no children from homosexual unions, so they shouldn’t be very fruitful in the coming years. We just have to protect some countries like Poland and wait for this ideological tendency to end." 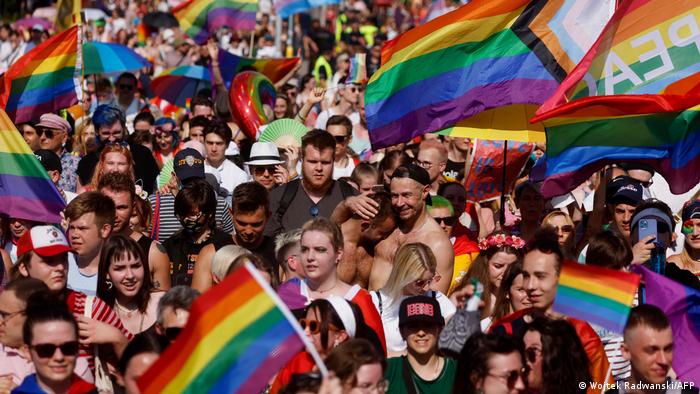 Same-sex marriage is not legal in Poland

The Campaign Against Homophobia (KPH), a major Polish LGTBQ organization, is coordinating the legal defense of the four activists.

Karolina Gardiel is a lawyer who works for the KPH, and she will be representing the activists in a future lawsuit. She told DW that Ordo Iuris intentionally uses opaque language to avoid being accused of LGBTQ discrimination.

"The family charter does not mention LGBTQ people explicitly. However, when you read the whole document, you really can’t be in any doubt that it’s aimed at LGBTQ people," Gardiel said. "You have to know the code in order to recognize what they actually mean."

Gardiel thinks that the way Ordo Iuris members talk about LGBTQ people has a terrifying resemblance to recent events in European history.

"I think it's a warning. Although nobody wants to talk about it, this kind of framing reminds us of the antisemitic rhetoric of the Nazis. Dehumanizing people, talking about ideology, something that is a threat to the community: This is used by them." 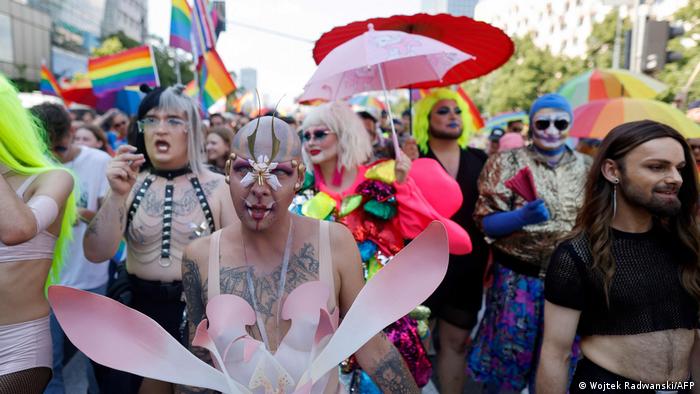 In recent years, some equality marches in Poland have been met by violent counterprotesters

Tolerance towards LGBTQ people in Poland is not mainstream and, since being elected in 2015, the ruling Law and Justice party has scapegoated the community to cement its base support. In 2019, when the party ran for reelection, one of its policy commitments was to fight the so-called LGBT ideology.

This toxic atmosphere has consequences for young Poles. A 2015-2016 report titled "Situation of LGBTA Persons in Poland" concluded that 69% of LGBTQ people in Poland under 18 had suicidal thoughts.

Understanding why Polish society is hostile towards LGBTQ people is complex, but Aleks Szczerbiak, a professor of politics in the UK and expert on Polish affairs, says religion is still a key influence on political ideology.

"I would say that the social conservatism in provincial small-town Poland is informed by their religiosity and the teaching of the Catholic Church. It’s a society where 40% of Poles attend Mass at least once a week," he told DW. 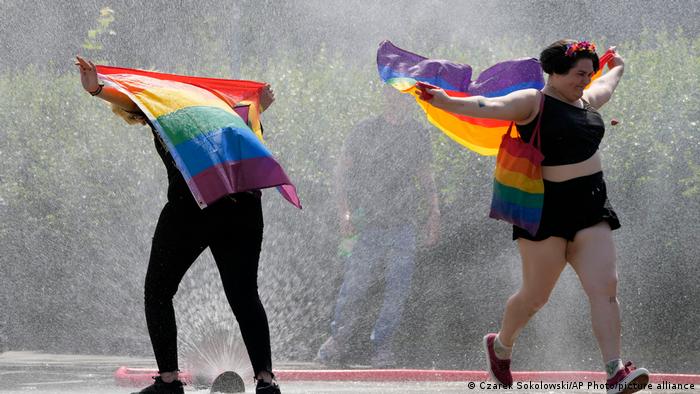 Currently, the activists face a total of six lawsuits from different districts. If they lose, the four activists must publish a string of apologies: one on their website, another on the steps of the European Parliament in Brussels and one at a press conference that they must fund.

There are also fines to pay to each of the municipalities involved and, with another lawsuit expected in Gromadka county, the activists fear the bill could exceed 200,000 zloty (€43,497, $51,348).

Kamil Maczuga, a co-founder of The Atlas of Hate and one of the activists on trial, told DW he thinks the case is strategic.

"They want to frighten us and prevent us from our actions. It looks like some organizations are afraid of our work and the international pressure on Poland," he said.

Since the Atlas of Hate was founded, international pressure on Polish anti-LGBTQ organizations like Ordo Iuris has gathered pace.

Partner towns across western Europe have raised concerns about the actions of their twin in Poland. In 2020, the European Parliament took action against the "LGBT-free ideology" zones by withdrawing funding from six towns and declaring itself an "LGBT+ Freedom Zone." European Commission President Ursula von der Leyen confronted Poland’s LGBTQ record, saying in a speech: "LGBTQI-free zones are humanity-free zones".

Maczuga and the three Atlas of Hate activists remain resilient because, whatever happens, they feel they can still count on international support.

"We cannot be sure that the court will dismiss this case. But we know we have help from international organizations. Even if we lose, we are not alone in this fight," Maczuga said.

The four activists will appear remotely for the first trial on July 20, with a court decision expected that same day. In the short term, the outcome will set a precedent for the role of LGBTQ activists in Poland, where full equality remains a long way off.

But, regardless of whether the activists win or lose, this trial adds another chapter in the arduous struggle for LGBTQ rights in Poland.