Rajdeep Sardesai: 'Corona has reminded us what news is supposed to be'

"Journalists should do fact-checking, and question their leaders," says Indian journalist Sardesai. "Rather than getting caught up in debates, we should ask: are you right or wrong?" 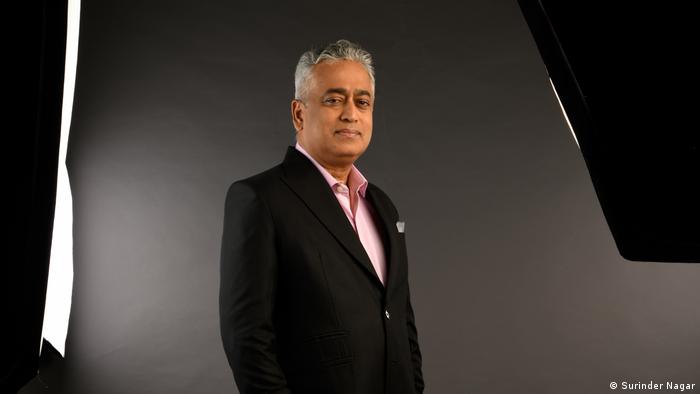 DW: When it comes to COVID 19, people rely on news outlets for almost all their information. As an experienced journalist, what is your assessment of the role of journalism in times of the corona pandemic?

Rajdeep Sardesai: I think in a strange way, at least in the Indian context, the corona pandemic has given us a great opportunity to remind ourselves what news was supposed to be, which is a public service. What has happened in India in the last 10 to 15 years is that there has been a proliferation of news channels and websites and there is a maddening competition now for eyeballs.

In the process what happened is that sensation overtook sense, credibility lost out to chaos and noise overtook news. Everything had to be magnified; everything had to be hyped up. There had to be a lot of drama. It was almost as if news TV had become infotainment and had replaced reality TV.

I think what has happened as a result of the corona pandemic is that it has forced us to go back to what we were originally meant to be: storytellers, who provide information and do their fact-checking. In a strange way, this has provided us with an opportunity to restore the faith of the viewer in us. More and more viewers in recent times — especially in India — were losing faith in TV in particular, because TV seemed to be doing more drama than news.

Where can journalists find help for promoting pluralism in their reporting?

I'm going to give the Indian example here. We are one of the most diverse societies in the world — if not the most diverse. With more than 15 official languages, 29 states and so on. You move from one part of India to another, the language changes, the dress changes, the topography changes.

What has happened here is that because most news networks were located in the capital Delhi, they tended to reflect a very Delhi-centric view of the world without recognizing that we are a subcontinent. Because there had been a certain homogeneity in the news coming from one centralized source, we had not been able to reflect the changes that were taking place below the surface, especially when it comes to the pluralism of our society.

The southern part of India today has been rather successful in combating corona. But it has taken corona for us to remind ourselves that we need to tell stories from the south of the country. Because the national capital is located in the north, our news choices and hierarchies were very north-centric. Pluralism in a country like India should be the reflection of diversity.

Corona has crossed all divides: religion, castes, community, region, and it has, in a sense, melted boundaries. On the weekend I had a roundtable of all the South Asian countries with Doctors from Bangladesh, Sri Lanka, Nepal, Pakistan. It has taken the coronavirus for us to talk as a region. The SAARC (South Asian Association for Regional Cooperation) itself has not met for years because of the India-Pakistan dispute, but corona is now melting these boundaries. As journalists, we need to reflect pluralism not just in times of corona; we need to reflect pluralism in our average day-to-day news gathering.

And how can we best fight populism and maintain our role as gatekeepers?

I think that is a bigger danger. We tend to reflect populist energies, rather than informing viewers. If there is something emotional that happens, it immediately becomes big news. And as a result, across the world, political leaders have resorted to what I call 'soundbite politics.' They say something which is dramatic, and it forms an emotional connection and suddenly that becomes the big headline.

The rise of the populist strongmen across the world is partly because journalists don't question them as hard as they should. The danger therein lies in the tendency to go with the popular mood rather than to go with what is right. And I think that is where the gatekeeping comes. Rather than getting caught up in the right-versus-left debates, I think the debate should be 'are you right or wrong?'

I think we have not questioned the populists enough in recent times, which is why they manage to get away with their populist rhetoric. And as journalists, we need to go back to being the gatekeepers of the news. And therefore in my opinion, every major news network will need a major fact-checking subgroup that is able to inform people, do background research, and challenge certain narratives. So pluralism and populism both require a rethink.

We also need to look at the role of social media in an epidemic. They spread panic. They have also painted communities like the Muslims in India as if they are all corona carriers. This was because of one particular instance that happened in a larger subgroup of Muslims, who were holding an event and then many of them were found to be corona-positive. But then that led immediately to a demonization of an entire community.

That again reflects the dangers of spreading fake news, fake videos and panic among people. I think maintaining diversity and challenging populist tendencies are huge challenges for the media. 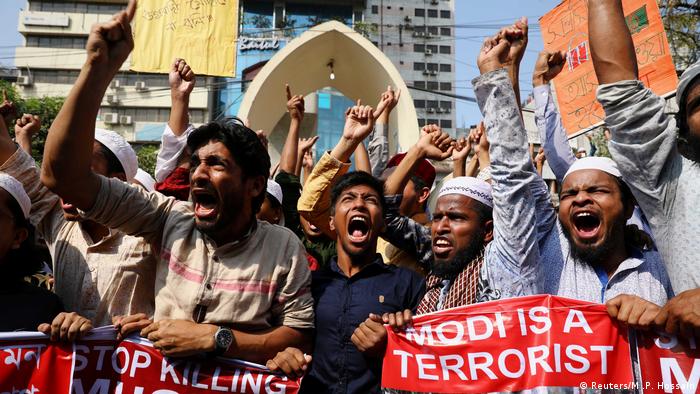 Muslims protest the violence against them in India

Many populist leaders across the world are abusing the current situation to their own ends. Would you say they will come out on top as the 'winners' of this current situation, or will they become obsolete in a world, which is no longer under their control?

This is a very good question. In a sense, corona has revealed the intellectual limits of populist politicians. But in times of a pandemic, people also turn to strong leaders. They provide them with a sense of hope and security. So it can cut both ways. In the short term, it may expose the limits of a particular politician and his lack of knowledge or lack of intellect in dealing with a situation like corona.

Who knows — it might also force countries to look inwards to sort of seek refuge in a form of nationalism. I think the jury is still out as to how corona will reflect on the politics of the world. Today, boundaries may be melting, tomorrow they may well get strengthened.

Again as journalists, I think we need to reflect much more on solidarity that exists in the world — rather than focus on the differences. The challenge for journalists is to interrogate the leadership. But journalists are worried about questioning those in power. Because the populist strongman operates by creating this nationalism and pushing it further, and therefore when you challenge or expose him, you are under the risk of being called 'anti-national.'

I keep saying we should be proud to be called anti-nationalist if as a result of our questioning we are called 'anti-national,' so be it. Journalists must be willing to question their leaders more often.

And there is also the big question of our time: is digitalization a chance or threat to qualitative journalism?

I started working in journalism in 1988. There was no private TV in India at the time. I started as a newspaper journalist who then moved to TV. I think digitalization is a two-edged sword. It is a huge opportunity, but it is also a dangerous weapon. We have WhatsApp messages floating around and spreading fake news — in real time. That is a huge danger. We have 400 million WhatsApp users in India. You can imagine the impact of one fake news WhatsApp message on mindsets.

Digitalization can lead to a proliferation of fake news, but on the other hand it can also offer huge opportunities for people to challenge dominant narratives, to democratize the dialogue. It gives many more the chance to be citizen journalists, to have their own blogs, to communicate instantly, to tell stories in very different ways.

I do think digitalization is melting boundaries and making the world a smaller place but it runs the huge risk, particularly with open-source, large-scale social media platforms like Facebook and Twitter, that they can coarsen the dialogue. The dialogue is democratized, but it can also become very noxious, poisonous, and spread all kinds of rumors without having accurate fact checking.

What do you think is the main responsibility of our profession?

Truth-telling. We became journalists to chronicle news as it happens; that was our job. What happened along the way is that the lines between news and opinion got blurred. Increasingly, we became much more about opinion and less about news. We have got to be clear. While there is space for opinion, our primary duty is to tell the news story.

Our job is to show all sides. And we have to show them as objectively as possible. I make a big distinction between objectivity and neutrality. I don't think journalists can be neutral — but they must try to be objective.

And we must always show all sides to a story as a result.

Rajdeep Sardesai is a senior journalist, author and TV news presenter with over three decades of journalistic experience. He has covered major national and international stories, specializing in national politics. He has won more than 50 awards for journalistic excellence. Sardesai is the third most-followed journalist in the world on Twitter. He has completed his Masters and LLB from Oxford University. Currently, he is the consulting editor and lead news anchor of the India Today group. His latest book "2019: How Modi won India" was published in November 2019.

This interview was conducted by Reyhaneh Azizi.

The number of coronavirus infections has steadily risen in India, with the country so far recording over 23,500 cases. While several states are lagging in testing and containment, others are doing better. (24.04.2020)