Tesla allows sneak peek of its Gigafactory in Germany

In a charm offensive to strengthen support for its plant near Berlin, Tesla has staged a county fair for locals. The huge plant has yet to receive a final permit from authorities on the ground, Hardy Graupner reports. 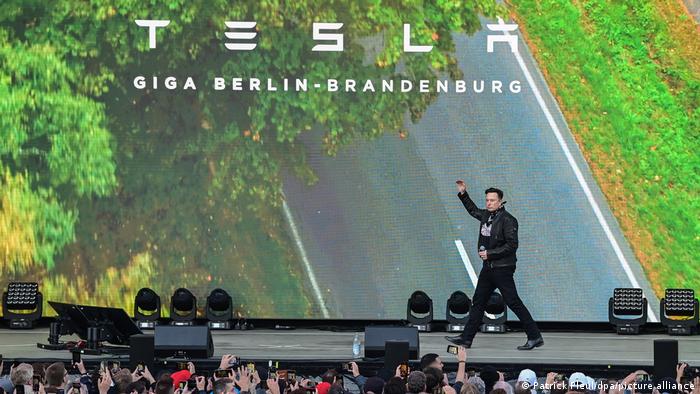 With a big wheel, electronic music and vegetarian food trucks, Elon Musk pulled out all the stops to win over opponents of the new Gigafactory

It was showtime on Saturday on the site of Tesla's first European Gigafactory. With roughly 9,000 tickets issued to local residents, it required a good deal of organizational talent to deal with the crowd amid strict pandemic precautions. Although long lines formed in front of the entrance gate, Tesla's crew and security services were extremely efficient. In all, a 15-minute wait was more than acceptable, considering what visitors were able to see.

In guided tours lasting an hour and a half each, local residents were able to watch the whole production process involved in making a Tesla electric car such as the Model Y.

People took their time to see what was going on in the stamping and casting units and later in the paint shop and assembly and quality control sections of the huge plant. Wherever questions arose, Tesla employees were on hand to answer them.

"I'm deeply impressed by what I'm seeing," a young woman said. "The degree of automation is unbelievable with all these robots around — I hear over 10,000 jobs will be created here, but, looking at the robots, you don't really understand where human beings will be needed at all."

A man standing next to the woman was phoning home to his wife and kids, who didn't get tickets. "You should have seen this," he enthused. "It's awesome what Tesla has built here in such a short time. It just tells me how much we Germans have fallen behind."

Information boards all along the guided tour track pointed to the Gigafactory's significance for the region, but also beyond it.

"We can produce as many cars here annually as were sold in the EU last year," Tesla told visitors, with half a million vehicles eventually expected to leave the Grünheide assembly line per year. Visitors were told that 80% of the workforce will be from Germany and 20% from 50 other countries. Also of some interest: 80% of all parts used in the Grünheide plant will come from European suppliers.

"I came all the way from Portugal, together with my friends," a member of a Tesla fan club said. "Of course I'm interested in electric cars, but it's also a more general interest in seeing Tesla helping pave the way towards a sustainable future — and I want to see the man," he added, referring to CEO Elon Musk, who was scheduled to make an appearance at the county fair later on.

After visiting the plant, people could also go for a fun ride in a Tesla car on a high-speed test track or simply enjoy some free drinks and food. The US company's resolve to pull out all the stops on Saturday is likely to win over at least some of the plant's opponents in the region. 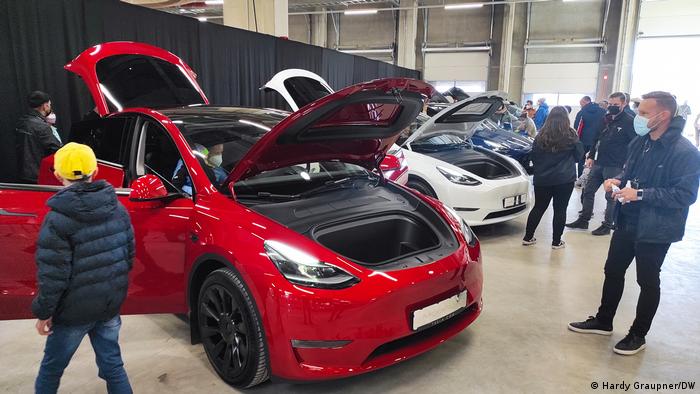 According to the online portal Business Insider, the Grünheide Gigafactory — including its battery cell production plant — will get a final permit from the Brandenburg State Office for the Environment (LfU) later this year.

Originally planning to open its Gigafactory in July, Tesla has been forced to move the date closer to the end of the year, blaming what it called German bureaucratic hurdles. Though many in the area have welcomed the prospect of thousands of news jobs, others have expressed mainly environmental concerns that Tesla is still dealing with.

When the company announced its plan to add a battery cell plant to the Grünheide premises earlier this year, more than 800 objections from local residents and environmental groups were filed. They are currently being dealt with in a virtual hearing via email. Critics and Tesla have until mid-October to present their arguments.

The US company will again be responding to concerns about the Gigafactory's water consumption. So far, it has stuck to its argument that the plant will not harm the drinking water supply in the area, following fresh contracts with a water management firm to secure just that.

The carmaker promised that it would also meet German requirements for a viable incident concept to protect employees in the event of an accident, including the handling of hazardous substances. 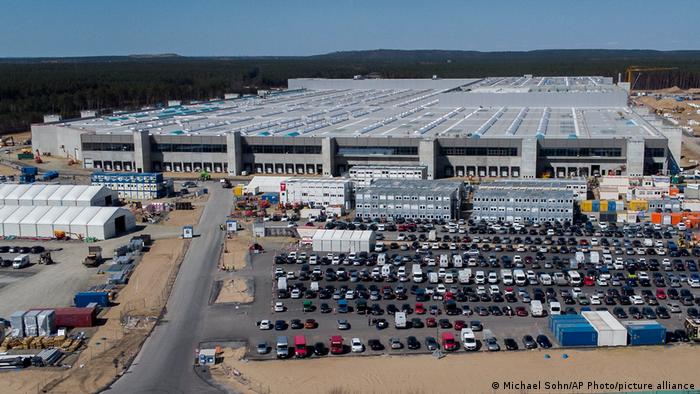 The German government is expected to decide before the end of the year just how much state aid Tesla will receive for its battery cell unit. The company is investing about €5 billion ($5.8 billion) in the plant. The German daily Tagesspiegel reports that this unusually high investment "means that the US car manufacturer can count on German state subsidies of €1.14 billion."

The subsidies would dovetail with a plan approved by the European Union to assist major players in the production of electric vehicle batteries with a view to reducing the bloc's reliance on imports from China and other overseas industry leaders.

The US government is investigating Tesla's partially automated driving system after crashes that left one person dead and 17 people injured.

The electric carmaker will leave its headquarters in Silicon Valley for Austin. Musk is one of several tech bosses to have personally left California for states with less regulation.