In 2017, the White House Correspondents' Association received the DW Freedom of Speech Award. Current WHCA president Jonathan Karl tells DW how the latest developments in the US affect journalists. 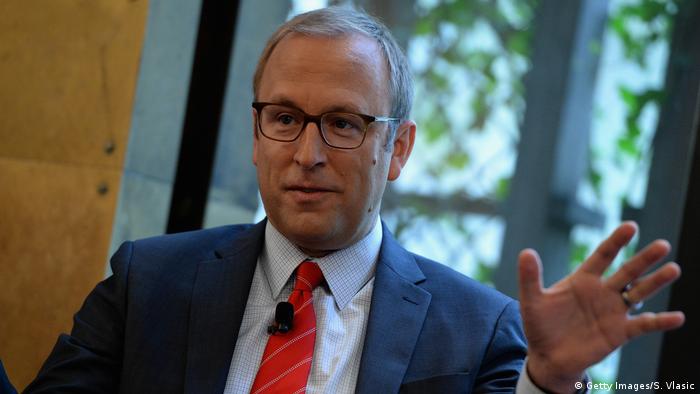 DW: First of all, what is it like to be a reporter in the US right now?

Jonathan Karl: We are facing some extraordinary challenges right now. The press corps is reporting from all these protests while also covering all the other stories that are happening.

These recent weeks have been back to back stories with all the rallies in the US but we’re also covering all the COVID-19 news simultaneously.

Is this intensity comparable to anything you’ve witnessed in journalism before - or is it new ground even for seasoned journalists?

As the US is now entering election season, how do you believe these recent events might influence the presidential election in November? 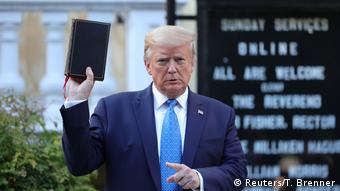 On June 1, Trump was photographed holding up a bible in front of St. John's Episcopal Church - in the midst of ongoing protests over racial inequality in the US

Opinions are pretty hard in the US right now. President has a base of supporters who will vote for him, no matter what. But there is a large percentage of the country  that oppose him, no matter what. So it’s difficult to gauge how these events will influence the election or to predict what might happen.

I'll tell you what, though: I believe that the recent image of Trump holding the bible outside St. John’s Episcopal Church in Washington DC will probably go down in history as the defining image, the defining moment of his presidency.

How do you protect yourself as a journalist in these turbulent times - especially in the middle of a global pandemic?

There is no short answer to that. There's a heck of a lot of uncertainty right now. The pandemic is clearly not over. In fact, there are indications that people opening up businesses in certain states has resulted in an increase in corona cases around the country. In some places, hospitalization numbers have also actually gone up since the protests began. 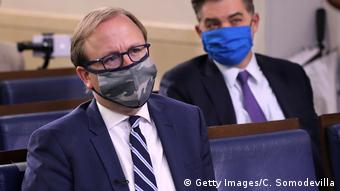 Jonathan Karl, seen here in the White House Brady Press Briefing Room on May 08, says that amid COVID-19, journalists are working in uncharted territory

So there is the very real fear of further consequences, and there’s still a long way to go until there’s a vaccine. And there’s nothing we can do about that.

It will take a good while until things are back to normal in any way, and that will have an impact on many things we are still going to be covering this year: How will all this affect political campaigns for the elections? How will rallies be affected? How will we cover them? There are a lot of questions, and there isn’t going to be an answer before the November elections, that much is clear.

What about violence against reporters? There have been attacks on journalists covering the protests in the US in response to the death of George Floyd. A DW journalist in Minneapolis was shot at with projectiles, a CNN reporter was arrested. What’s your reaction to these developments?

It is deeply concerning to see a journalist arrested or physically assaulted while simply engaging in the work of journalism. CNN reporter Omar Jimenez was arrested while he was on air. He was then released rather quickly, but why was he held in the first place? Because police officers thought it was ok to arrest him while he was doing a report. That is a horrific thing to watch.

There have been instances of journalists being attacked before in the US, but it has become more widespread. And that is worrying.

How are audiences reacting to this trend? Do journalists in the US enjoy support from their audiences amid all these developments?

We have a really strong tradition of a free and independent press in the US. I think that people need journalism now more than ever. So we get a lot of support for what we do. Journalism is widely appreciated right now.

A free and independent press is the cornerstone of American democracy, and it is especially valuable in this moment.

Jonathan Karl is the Chief White House Correspondent of ABC News and the incumbent president of the White House Correspondents' Association (WHCA). In 2017, Deutsche Welle awarded the WHCA with its annual Freedom of Speech Award (FOSA) in recognition of over one century of dedication to fair reporting from the White House. DW Director General Peter Limbourg presented the DW Freedom of Speech Award to the then-president of the association, Jeff Mason.

Opinion: Press freedom — we will not stop reporting

DW reporters often face police aggression in African countries or Russia. But being under police fire in the motherland of modern democracy is a novelty, says DW Editor-in-Chief Manuela Kasper-Claridge. (03.06.2020)

Donald Trump's press conference was a clear declaration of war against the critical media, says DW's Ines Pohl. The president-elect dodged and ignored many key questions about his upcoming administration. (12.01.2017)

Enemy of the people or critical public ally? The state the media in the US

Once a balwark of press freedom, the US is struggling with its own media landscape as local papers are bought and closed, technology is used to limit freedom of expression and scores of journalists lose their jobs. (11.03.2019)

The latest spat between the US president and CNN reporter Jim Acosta made headlines worldwide, but Donald Trump attacks journalists on a regular basis. Here are some of Trump's strongest outbursts against the press. (08.11.2018)