Germany's decision to stay out of Libya lauded by readers

The conflict in Libya continues without a sign of a clear victor in the wake of NATO intervention. Readers have been writing in with their thoughts on the situation. 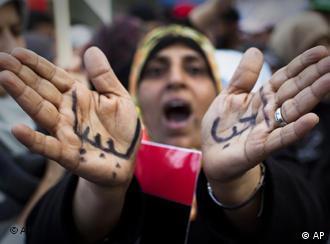 Germany and Poland have stayed out of the conflict

The following comments reflect the views of DW-WORLD.DE readers. DW-WORLD.DE reserves the right to edit for length and appropriateness of content.

Covert operatives are indeed the precursor to ground troops in Libya! As you can see the involvement of the West is becoming deeper and deeper, which is no longer the original professed scope outlined by the promoters of the "no-fly zone." Ground troops will eventually be necessary to save face (the West's) in the aftermath of the routing of the rebels by loyalist forces. Besides, the rebels by themselves can't be counted on to oust Gadhafi because of their inexperience and sheer stupidity! Congratulations to Germany and Poland for not participating in this foolish adventure! -- Kevin, Philippines

Here the US is trying again to get other people to do the dirty work for their own interests. Why get involved in Libya? To claim the protection and democratization of the Libyan people is pure hypocrisy. If there weren't oil and other important resources there, they would not give a hoot. Why not concentrate on helping Japan instead? -- Merillet, France

Germany and Poland are right in their decision not to join the ongoing conflict in Libya. As everyone can see, the promoters of the no-fly zone are wrong in thinking that it will be a short war and making bombing raids is enough to eventually flush out Gadhafi. That has not happened and now, there's talk of sending ground troops! -- Irma, Philippines

It is somebody else's turn to rush into this civil war. Sarkozy is eager to do so, Italy was happily befriending Libya. Leave it to the EU, United Nations or the international alliances of African or Arab countries. Saudi Arabia can afford intervention or mediation. The US cannot afford more international armed conflicts while we close schools and cut domestic programs for the elderly. -- Felicia, US

I am proud that reason prevailed in the German and Polish stance on Libya. As for the former-US National Security Adviser's critique, this is all about US interests and falls in the same category as the statement by Joschka Fisher; paid lobbyist for US interests. Zbigniew Brzezinski is still trying to manufacture public opinion with his outdated Cold War mentality. It seems the German government has shed their US apron strings, which was long overdue. Again I have to say, good work for a mature and wise policy on the decision not to take part in a Libyan civil war. -- G., Canada

I think Obama is right. He said overthrowing Hussein had a cost of millions upon millions - "we can't do it again." It is clear that overthrowing Gadhafi is not possible for the rebels [alone]. Only somebody with a million upon millions [of dollars] can succeed. -- Franklin, Costa Rica

I suppose the rebels shouldn't be armed, otherwise it would seem like Western countries are using Libya's war as a market for their weapons. Diplomacy should begin immediately on both sides and a ceasefire should be declared. Bombardment will achieve nothing. It begins to smell like the "democracy" brought to Iraq. -- Anar, Azerbaijan

US, British operatives in Libya 'not surprising,' military expert says

News that the US and Britain have special operatives on the ground in Libya could become a source of irritation to NATO allies who maintain that the coalition forces are not to get directly involved in the conflict. (31.03.2011)

Rebel fighters flee from the heavy firepower of Gadhafi's troops, highlighting their weakness without western airstrikes to tip the scales in their favor. Western nations meanwhile continue to debate arming rebel forces. (30.03.2011)