COVID-19 has forced the local journalism industry to face existential questions about its relevance and financial survival in an increasingly digital media environment. What will it take for local media to pull through? 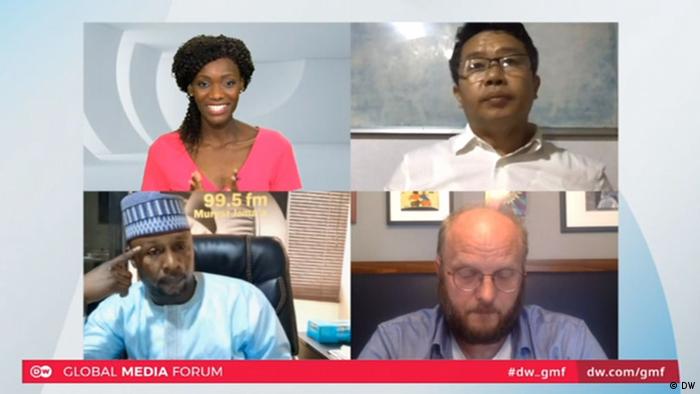 The third digital panel session held as part of DW's Global Media Forum 2020 discussed the impact of coronavirus on local media organizations and the opportunities and challenges it also presents for innovation and creative solutions.

Joining the session were panelists Brang Mai, the CEO, co-founder and executive editor of the Myitkyina News Journal in Myanmar; Nasir Salisu Zango, a journalist and editor at Freedom Radio in Kano, Nigeria; and David Schraven, founder and publisher of Correctiv, the first nonprofit investigative newsroom in the German-speaking world. The discussion was hosted by DW presenter, Elizabeth Shoo.

Local journalism was in crisis before the pandemic hit, but for Freedom Radio in Nigeria the pandemic has put its very survival in question. The organization lost millions in revenue as a result of COVID-19, said Nasir Salisu Zango.

As advertising revenue fell the station was forced to lay off around half the staff of 200, with small numbers returning as virus restrictions in the country eased. Most of those who have remained with the company are still working from home — and on reduced salaries.

A question of trust

In Myanmar, Brang Mai said the small newsroom of Myitkyina remained unaffected by job cuts. Instead, the pandemic has presented an opportunity to build on the organization's unique strengths. 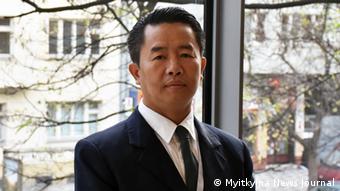 "Lots of local people trust us," said Brang Mai. "We are very close to our local people, so people believe in us. That's how we can gain a lot of trust from audiences. Local business owners follow with their business, their advertisements, so … we can survive, I think."

While coronavirus continues to damage the media industry as a whole in Germany, Correctiv, like Myitkyina, has been able to capitalize on its strengths. As a subscription-based media organization, it has used its resources to set up an additional newsroom and actually hire more staff, said David Schraven.

Since the onset of the pandemic, journalists across the world have been increasingly forced to move to digital platforms. It has been a steep learning curve for the journalists at Freedom Radio, according to Nasir Salisu Zango, but also a major benefit.

"This is a positive side from the crisis, because most of our staff are now working digitally," he said. 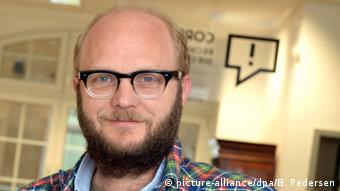 Digitalization among news organizations in Germany was already relatively advanced before the COVID-19 outbreak. What was more important, according to David Schraven, was the discovery of new ways of reaching out to audiences. Correctiv came up with an innovative way of gathering material for stories by talking to people who passed by their mobile coffee stand in the city center. "This was something that was not digitalized. It was very old school," Schraven said.

'Advantages to be tapped'

For Brang Mai, the increased focus on digital platforms has been a boon. Thanks to COVID-19, Myitkyina has increased its audience engagement. "[They] were not only writing comments, but they can also become our sources. We got lots of calls from audiences [about] fact-checking and things like that," he said. Nasir Salisu Zango from Freedom Radio says that while the demand for digital products is up, resources are low

Freedom Radio in Nigeria has also increased its reach through digitalization, by using reports sent by stringers from among its audience. At the same time, its new media presence has increased by more than 70% on last month. "There are many advantages that we are trying to tap, so that we increase our strength," said Nasir Salisu Zango.

Will it be possible to sustain the gains that some local media have made since the COVID-19 outbreak? And will newsrooms have the capacity to tackle the scourge of disinformation? This will likely be difficult for organizations lacking the resources to set up dedicated units to combat fake news, according to the panelists.

At the same time, post-pandemic, it may be possible for them to build on the trust that has been established through local, reliable reporting. 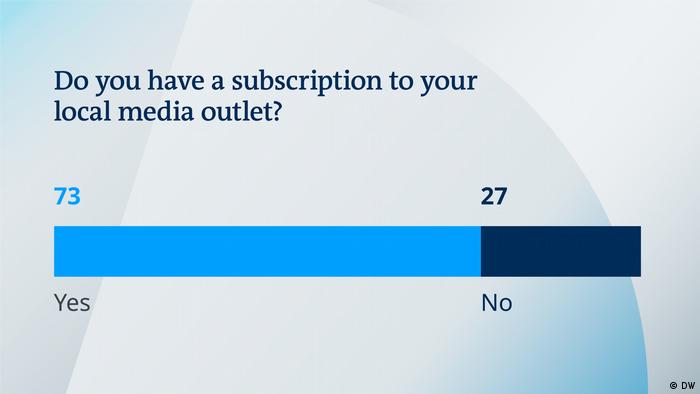 According to a GMF online survey, nearly three out of four people subscribe to their local media outlet

While it's important for local media to be online and strengthen their digital presence, especially as most people today want to get their news digitally on their phone or computer, it's also necessary to build a brand by being physically "on the spot," said David Schraven.

"Some people think when you talk about digitalization it's enough to publish something online. It's not. You need to be there."