After his election as pope, British tabloids highlighted Cardinal Ratzinger's past as a teenager in Nazi Germany, raising the ire of German daily "Bild" and of some DW-WORLD readers. 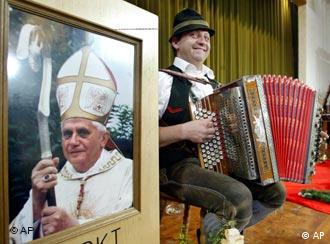 Being German doesn't make him a Nazi

I'm glad we don't have that gutter type of journalists in Canada. The British papers that attacked the pope need to see that they have brought the contempt of the whole world on themselves. They are not only hated at home in England but everywhere in the world among fair minded decent people. -- Charles Reichert, Canada

It is sad and unfair of British newspapers to attack the new pope, Benedict XVI. I, as a Catholic, am deeply distressed because of this. -- Maria Stec, US and Poland

Yes, I think that it was in typical British style that the pope was indeed libeled and slandered. I think he deserves an apology in just as bold a print. Moreover, I think the British prime minister should stand up and denounce this sort of journalism. -- John Breaux

Yes, the British newspapers are not only unfair with their treatment of our new pope, but they are also displaying their normal behavior about anything non-British. They will probably end up giving a left-handed apology by saying that they "were just joshing." Their humor even stinks! -- Terry Cummings

The British press was not at all unfair to examine the past of Pope Benedict. One's life is formed by one's past experiences. The fact that the new pope served time in the Hitler Youth as a teenager is significant. This is not to say one should not be allowed to move beyond one's past though. You have to remember the new pope is a mere mortal. A pope is not capable of granting salvation and cannot, therefore, be expected to be perfect. Our only possible means of salvation can be found in Jesus Christ. -- Jeff N., US

It is just so annoying and unbelievable -- can all the media just please give the pope a chance? It's just so unfair. I am tired of everyone trying to find dirt on the pope. Why don't they let us know more interesting things about all that he has done? And just let him show us what a great successor of the great John Paul II he can be? -- Ximena Lara, Mexico

German newspapers should get angry at Rupert Murdoch and not the British people since he owns and closely rules the editorial stance of all. Even though he is supposed to be a Catholic, he is a nasty one. -- JJ Hubbard

The Sun and Mirror headlines are not reflected in the actual coverage. They give a balanced view of his theological stance as has, for example, the Daily Telegraph. They also give a fair account of his position during the Nazi period. Actually the headlines are "friendly jocular" in a typically British way. Another paper prefers to describe him as a German shepherd. Another has a cartoon of him shouting from his balcony ordering his Swiss guards and staff to get into proper straight lines. -- Jack Rice

I think that when one considers what the Mirror and Sun had to say about the new pope, one must consider the source. They are tabloid rags who live only to sensationalize to sell papers. Was the pope a member of the Hitler Youth? Yes, but honestly during that period did anyone have a choice? Was the new pope forthcoming about his past? Yes. I think that this simple act of recognizing and admitting the error made in the past and atoning for it speaks more about the man then his past. -- Paul Watson, Canada

I think calling the English journalists "idiots" is not proper by the German Bild editors. However, to portray the pope as being a Hitler sympathizing person is quite outrageous and shameful. To suggest that a person at the tender age of 14 could make a political statement of joining a Hitler organization is beyond comprehension. The English newspapers should get their act together and move on. -- Manfred Zapka, US

I think it very unfair to dredge up the past of someone who has since proven that he was an unwilling Nazi youth. We all are striving to better ourselves and improve. Anyone with half intelligence can go to the library and read about the era and draw the conclusion that Hitler did not give very many people a choice. He even killed those who were loyal to him for being honest and speaking their minds. I think the issue now is not what was done way back then but how we learn from history and not repeat the tragedies and failures. We cannot afford to throw stones and judge people by their past alone. -- Jennifer Hurlock, US

I think it is only expected that the secular media would demonize Benedict XVI, a non-progressive pope. Traditionalists are no longer welcome in the mainstream media, even if they are the head of a traditional institution, such as the Catholic Church. Also, the media wants to sell papers. -- Matthew Schoolfield, US

It does not surprise me in the least that one of England's leading news services would publish such sentiment, in light of what they as a small country went through during the war years. Nor do I find it distasteful, for the one single reason: virtually everyone who served in the Hitler Youth Movement and the Nazi war criminals who came to the US has denied or played down their roles during the war years, 1930s and leading into the 1940s and onward. -- John Whitefox, US

I don't like the derogatory language that some of the media (particularly from the US) is using to speak of the pope. Let's give the man the benefit of the doubt. I'm sure he'll end up doing an excellent job. -- Milena Barrios, Columbia

I was happy to read your report regarding the Nazi labels put on Pope Benedict XVI by the British media. I live in Canada and here we also had some of those comments on prime time TV news by the major broadcasters. I was offended by the labels and am not German, but a Catholic. -- rvkulak, Canada

Germany's top-selling newspaper "Bild" was furious on Thursday at the coverage of the new pope by British newspapers, which had accentuated Benedict XVI's past as a teenager in Nazi Germany. (April 21, 2005)